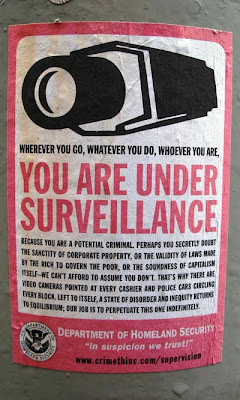 Some high schools have a specific academic focus aimed at preparing students for solid job prospects. In August of 2007, Joppatowne High School in Maryland became the first high school dedicated to the future of homeland security. The Homeland Security and Emergency Preparedness Programs are being funded by federal, state, and local agencies, as well as some defense contractors. The military industrial complex is booming in Maryland, with defense contractors and weapons manufacturers aplenty. The students will choose a track: information and communication technology, criminal justice and law enforcement, or “homeland security science.” Some of the 75 students in this program will receive limited security clearances at the nearby Army chemical warfare lab. Naturally, not all Joppatowne grads will join the intelligence community. Some will certainly end up as hired guns to the “contractors” aka mercenaries currently involved in the US occupation of Iraq. Jonathan Zimmerman, a NY history of education professor said, “the devil lies in whether this is going to be a school for education or indoctrination.”

In recent months, I’ve traveled extensively around the state. I’ve had the opportunity to visit a number of high schools. One school was a fortress. It was unclear where one even entered the building – which didn’t matter so much, since all of the doors were locked. I had to be guided in by a person wearing a lanyard with ID, who brought me to the office, where I was signed in and scrutinized. I was assigned an escort, who had a walkie-talkie. I was the advance person for a presidential candidate visiting the school. I asked to have a small group of students wait outside with signs, so the candidate would know where to enter the building. My request was denied. The students would not be allowed to be outside, “for safety’s sake.” This particular school is not downtown, or in a densely populated area – it’s out on a huge, remote parcel of land. Teachers all seemed to carry walkie talkies, and some were engaged in tracking down some students who didn’t appear to be doing anything other than being students, late for class. I asked one of the teachers about all of the security measures – had they ever had an incident? She said no, they hadn’t, but "this is the way things are since Columbine."

In contrast, another public school, one located in a more downtown area had students waiting outside for the advance team, and later for the candidate. The campus was more open and a lot friendlier. The students at Lockdown High were disinterested, and reluctantly asked very standard questions. The students at Friendly High were fully engaged, and asked better questions than any you’ve heard in any debate so far. Is there a correlation between the level of security and the level of curiosity and education? Sure seems like it.

It has been disturbing to read the reactions to the recent Big Impressive Random Search at Kennett High School. The prevailing attitude seems to be that all kids are presumed guilty, and therefore should not object to being searched to prove otherwise. The Bush administration has done a fine job of programming the populace to be fearful. We are told “if you aren’t guilty, you have nothing to hide” as a means of justifying illegal searches and wiretaps. Now our students are being programmed in the same way. In the name of achieving some sort of nebulous “safety” the student’s lockers and cars are being searched. Were the belongings and cars of teachers, staff, and administrators searched, or are only students “unsafe?”

In the years since 9/11, many of us are subjected to indignities that are supposed to keep us safe. Bored airport security people sometimes look in the trunk of my car. They don’t paw through the contents of the trunk, just open and look. We must take off our shoes, our coats, empty our computer bags, send our belongings through machines at airports – where we must throw out our chapstick if it doesn’t have a baggie to travel in. This isn’t protecting us from anything – it’s merely theater developed to provide the illusion that we are being protected. I am on an airport watch list. Every time I fly, I am taken out of line to be wanded, felt up, and X-rayed, along with all of my belongings, both carryon and checked luggage. I am not a terrorist. I’ve never spoken with a terrorist – at least not that I’m aware of. I don’t make many overseas phone calls, and the ones I do are to the UK. Somewhere, somehow I was put on a list, probably because of my political beliefs, or maybe it was the purchasing of Near East Rice Pilaf. That handy discount card you use at the supermarket gathers information about you, and that information can be accessed by Big Brother (and was, after 9/11), in the name of “national security.” I’ll never know – and I’ll probably never get off the list. Average citizens are not allowed to find out anything about these watch lists, which are protected from those who would question, in the name of “national security.”

We are a nation under surveillance. Many of the folks who responded to last week’s TeleTalk question in the Sun do not even question the need for all of this security any more. By teaching our kids that they have no rights, that their property can be searched at any time, we are indoctrinating them into the future, where they do not question domestic wiretapping and warrantless searches. They will parrot the mantra, “If you don’t have anything to hide, you don’t have anything to fear.” They will learn that they have no rights, and that they are always being watched. They will be perfectly groomed to take their place in our brave new world of the unending “war on terra.” There is no need to teach critical thinking skills to the cannon fodder of the future.

“There is no telling how many wars it will take to secure freedom in the homeland.” George W. Bush

The last paper mill in Groveton is closing at the end of this month, leaving 300 people without jobs. The North Country has lost nearly all of its manufacturing jobs – good paying jobs that are being replaced with low wage service jobs. I recently spoke with a woman in Groveton whose husband and other family members worked at the mill. She’s currently working 2 jobs to help put her kids through college. She told me that they’d probably have to move somewhere out of state in order to find decent paying jobs. Property in Groveton, she said, is slowly being sold to out of state folks who want to build second homes. Another community destroyed by our trade policies.

There is little chance of relief for our neighbors to the north. The pending Verizon Fairpoint deal will insure that the northern part of the state will remain in the technological dark ages for decades to come. Verizon wants to sell its northern New England land lines to Fairpoint for $2.7 billion. If the sale goes through, Verizon will abandon its “low value” customers – primarily rural- and keep the profitable customers (Big Business) and wireless. Verizon would qualify for a $700 million tax break, and would still control 60% of Fairpoint. It’s a great deal for Verizon. Fairpoint is a small company that is already carrying a heavy debt load, and will need to borrow $1.7 billion to finance the sale. Fairpoint would also pay Verizon $100 million to continue its billing for the first four months until they are ready to run a network that is about 6 times of what it currently owns. If Fairpoint isn’t ready in 4 months, the meter will continue to run.

You’ve probably seen the Fairpoint TV commercials where a farmer in Fryeburg, Maine speaks about how great their service is in a rural area. Compared to say…Colombia, NH, Fryeburg is the big city. One wonders at how a big, expensive ad campaign is supposed to reassure us that a company already far in debt is going to expand northern NH’s infrastructure needs. What infrastructure there is has been poorly maintained by Verizon, and will require serious investment if we are to move forward in the global market economy. A company that seems to be biting off more than it can chew isn’t going to help us move forward.

It’s interesting to read about the support for this deal. Executive Councilor Ray Burton, who lives in Bath (an area living in the technological dark ages) is in favor of it. So is State Representative Gene Chandler, who isn’t exactly Mr. Tech Savvy, as we all learned last year. It will be worth following the campaign money trail to learn why these two men are acting against the best interests of their constituents.

State Senators Deborah Reynolds, Jackie Cilley, and Robert Letourneau are seeing it a little differently. They collaborated on an editorial that was recently printed around the state. This bi-partisan triumvirate expressed a great deal of concern for the future of economic development and job creation in our state.

According to an analysis done by Jobs With Justice, nearly nine out of ten letters filed with the NH Public Utilities Commission (PUC) oppose the sale. Of comments from elected officials, 97% opposed the sale. Only two were in favor of it. Fairpoint and Verizon are both calling the report flawed. Fairpoint Chairman Gene Johnson has dismissed the letters as the result of “a tremendous political campaign by the unions.” He claimed that hundreds of people spoke up on behalf of Fairpoint at the public hearings. Now, I didn’t go to all of the hearings, but at the one I attended, there were fewer than five people who stood up in support of Fairpoint. Sure the union folks are worried about losing their jobs and pensions, why wouldn’t they be? Fairpoint has a very small percentage of union jobs in its current holdings. Given the load of debt they’ll be staggering under, they’re going to have to drive down wages and benefits, else they’ll be in trouble with shareholder dividends.

Many of us are already dissatisfied with the kind of “service” we experience from Verizon. Fairpoint will almost certainly continue to provide us with marginal service, while charging us more for it. How this will translate into upgrading internet service to rural customers is fairly predictable. It won’t translate. The rural customer will be left dangling, while Verizon laughs all the way to the bank. At least in the southern parts of the state, customers have options other than Verizon. We in the north are beholden to the Verizon monopoly. If we are lucky we have DSL, which is already outdated, and being presented by Fairpoint as an improvement. No fear of FIOS in the north, folks. As the manufacturing jobs continue to be exported overseas, there is no chance that we’ll be competitive in the global marketplace. Northern NH will continue to try to exist on a tourist economy, despite global climate change, and continue to provide all the low paying service jobs one could ask for. And on top of that – our phone bills will be going up.

There is still time to contact your elected officials and the PUC and tell them you oppose this sale. Maine will be deciding on December 13, and Vermont and New Hampshire will decide in January.