I posted the link to this blog piece  all over the Citizen's Bank Facebook page two weeks ago. I was contacted right away by a person from the chairman's office of the bank. After a week of playing phone tag, I spoke with her. This past Friday I received the title.

This should not have been so difficult. I shouldn't have had to resort to being a jerk to get the title to a car that was paid off years ago. 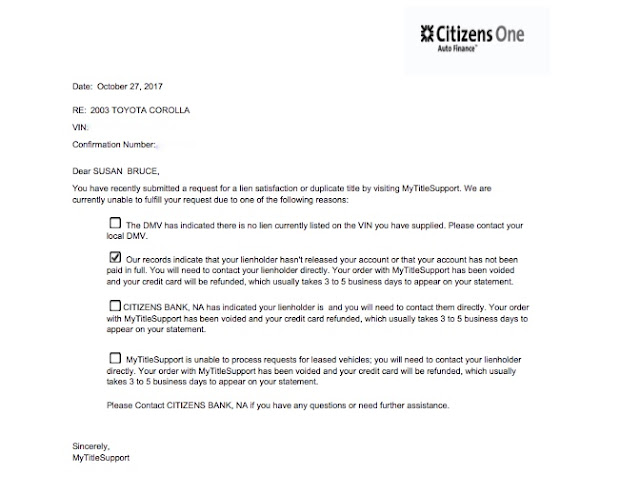 I bought a car in 2003. My loan was sold to Citizens Bank. I paid off the car in 2009/10. I never got the title. I was busy with a dying husband and forgot about it. Fast forward to 2014. I was in a car accident and the car was totaled. I can't get it towed away for salvage because I don't have the title.

Here's the thing. If I still did owe money on the car, they'd be all over me. In fact, they'd have repo'd it by now.

I have been jerked around endlessly and I've had enough. I want the damn title. Nothing should be as difficult as this has been.

The photo from above is the end result of what I was told to do today.

I want the damn title. 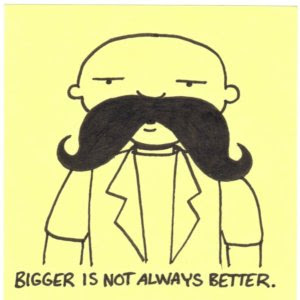 The story of the “unification plan” for Memorial Hospital got me thinking about bigger. There will be a vote in November to decide whether to “unify” the local board with Maine Medical Center and it’s 8 subsidiaries, into one single board. The local board would continue to function for the next five years, and after that, any decision would require a 2/3 majority. A 2/3 majority – and they have 8 subsidiaries. How is one little hospital going to fare in that power scenario? They also say there are no plans in development to reduce services at Memorial.

Not at this moment. Plans can change, quickly. If anyone can think of a situation where giving up local control worked out well, please let me know.

I have the same checking account I opened nearly 30 years ago, in North Conway, in a small bank that was locally owned. The bank was swallowed up, repeatedly by ever-larger banks, and is now owned by a bank that is one of the 10 largest in the US.

The branch I do my banking in is populated by a constantly changing group of employees. It’s impersonal. The website of the branch doesn’t even list the name of the manager, as I learned recently when I wished to lodge a complaint about the service. It’s a much bigger bank than it was 30 years ago. Bigger is publicly traded and has shareholders, and that’s what matters, not customer service. Bigger is not better.

Nearly any company you call will have you wrestling with an automated menu that purports to direct your call. None of the choices will be what you want, and you’ll have to listen to the menu about three times to make sure of that. It sucks up a lot of your time, and it’s lousy customer service, BUT it means that no one need be hired to answer the phone and direct calls, so the company is saving money. The bigger the company, the more impenetrable the menu. The bigger the company, the less transparency and accountability there is.

The bigger the company the less they care about whether or not you do business with them. Customer service is not a priority. Look at what we tolerate from airlines.

The Telecommunications Act of 1996 paved the way for the giant media monopolies we see today. How do you like your options for cable? For phone service? How is your internet speed? Do you have lots of choices? The best customer service I ever had from an internet company was with a small company that served part of VT and part of northern NH. If something happened to my service, people would show up at my house within hours. They answered their phone themselves, too.

How is bigger working out? We see this playing out in newspapers, where some corporate media group has mostly swallowed up the small, weekly papers in the top half of the state. In these scenarios the bottom line is the main concern. The news itself is in second place, and the employees a distant third. They all look the same and have the same bland tone.

We see this playing out in radio. At the recent NHAB Granite Mike Awards, WMUR picked up most of the television awards, which isn’t all that difficult when you’re the only network station in the state. The big radio conglomerates won most of the radio awards. Congratulations to WMWV/WVMJ on their awards, and for surviving as the endangered species they are; independently owned commercial stations.

The more stations the company has, the more they all sound the same. I was spoiled by listening to WMWV for so many years, a station where, sometimes (in decades past) things could get a little unruly. It was not cookie cutter radio. The big corporate stations all sound mostly the same, with loud morning hosts bellowing inanities, and a lot of hyper compressed voices pitching ads. They are big. Are they better? Is money really all that matters?

Insurance is another area where we have corporate monopolies, especially health care. No one has ever told me how much they love their health insurance company. Health insurance is the greedy middle-man that drives up costs while providing nothing useful in the way of services. They often make your medical decisions – not you or your doctor. Because of them, doctors see patients on an assembly line, spending between 13-16 minutes with each of them. A study from 2016 showed doctors spending 27% of their work day with patients. The rest of their time is spent on documentation and paperwork. Health insurance companies and HMO’s have created an enormous, impersonal industry. They’ve also built monopolies. The relationship we have with our doctors and our hospital should be personal.

Memorial Hospital is of vital importance to the community. Think long and hard before surrendering local control.


This was published as an op-ed in the October 27 issue of the Conway Daily Sun newspaper
Posted by susanthe at 7:57 PM 1 comment: Links to this post 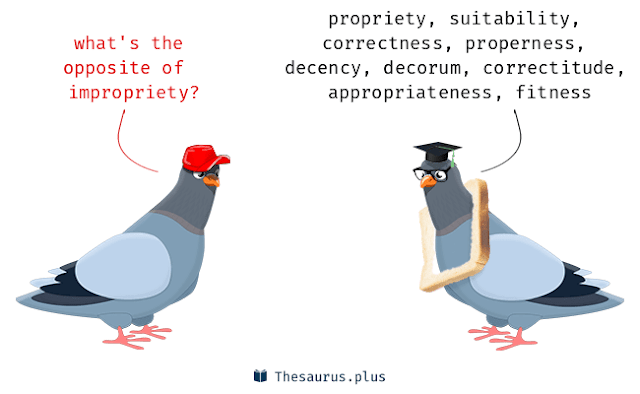 Once upon a time, people who held elected office used to strive to avoid the appearance of impropriety. Back in those halcyon days, we were concerned with corruption and ethics. There were big public investigations. There were legal charges and fines. People went to prison.

Wherever there is any kind of power there is the possibility of corruption. During the Grant administration, the Whiskey Ring scandal was exposed in 1875. Whiskey distillers were bribing government officials who, in turn, helped the distillers evade federal taxes on their product. Millions of dollars in federal taxes were diverted. Orville Babcock, private secretary to President Grant was indicted as a member of the ring, which contributed (along with other scandals) to his administration being seen as emblematic of corruption.

The Teapot Dome scandal also involved bribery, and took place between 1921-1922, during the Harding administration. The US Navy converted from using coal to fuel oil. President Taft designated several oil producing areas as Naval Oil Reserves. In 1921, President Harding issued an executive order that turned control of the Teapot Dome Oil Field in Wyoming and the Elk Hills and Buena Vista Oil Fields in California from the Dept. of the Navy to the Dept. of the Interior. This was implemented in 1922 at the request of Interior Secretary Albert Fall. Later in the year, Fall leased oil production rights at Teapot Dome to Mammoth Oil, a subsidy of Sinclair Oil. He leased the Elk Hills reserve to Pan American Petroleum and Transport Company. There was no competitive bidding in either case. Fall became a wealthy man, after receiving gifts from the executives in both companies that would today be worth $5.42 million. The sudden improvement in his standard of living brought about his downfall. The leases themselves were not illegal. The secret deals and the bribery were.

There was an investigation. Other oil companies were miffed about the no bid licenses that had been granted, and Senator Robert LaFollette of Wisconsin led an investigation by the Senate Committee on Public Lands. Fall had done a good job of covering his tracks, but Edward Doheny of Pan American Petroleum had given Fall a no-interest loan of $100,000. Once that loan (bribe) was discovered, Fall was finished. He was found guilty of accepting bribes. Edward Doheny was acquitted of paying bribes to Fall.

Corporations will always find ways to bribe public officials into aiding their pursuit of lining their pockets. Coal, oil, and uranium aren’t the only natural resources that are being mined by the unscrupulous. Right in our own back yard, the largest food and beverage company in the world is mining water, and seeking to expand their extraction operations in Fryeburg, Maine. Local elected officials have failed – and failed mightily - to avoid the appearance of impropriety.

Nestlé’s lack of ethics became national news in the 1970’s when we learned that they were aggressively marketing baby formula to third world mothers. They handed out literature, had women dressed as nurses to discuss the benefits of formula, gave out baby bottles, and free samples. After the mother’s own milk dried up, they were forced to purchase formula, and often had nothing but contaminated water to mix it with. Many diluted the formula to stretch it out, because they were so poor. They weren’t told that diluting the formula, especially with contaminated water, could lead to malnutrition and the death of their infants.

The ensuing scandal and Nestle boycott brought about the creation of the International Code of Marketing Breast Milk Substitutes in 1981. The code states that baby food companies may not promote their products in hospitals or shops. They may not give free samples to mothers or give gifts to health workers or mothers. They may not give misleading information, and must explain the cost of using the formula.

Nestle is still under scrutiny. The boycott was called off for a few years, but it is back in place, because, naturally, they’ve found ways around the code. The opportunity to make money from some of the poorest people on the planet was too alluring. Nestle exploits, creates misfortune, and then profits from that misfortune.

In Michigan, where Flint residents were poisoned by their tap water, Nestle is working to increase the pumping of spring water in Osceola Township. They pay nothing for the water they pump there. Nothing. In Fryeburg they pay next to nothing, and that isn’t enough. They always want more. Nestle always finds unscrupulous elected officials to help sell their town down the river – a river they’ll suck dry, just as they sucked the original Poland Spring dry.

Dear Fryeburg: there’s always a quid pro, as Fightin’ Bob LaFollette found when he investigated Albert Fall. Find it. And oust those who would sell your town.