If Nothing Is True

Webster’s defines truth as: the property (as of a statement) of being in accord with fact or reality.

In 2016, the Oxford Dictionary chose post-truth as the word of the year. Truth’s been taking a beating for the last few years. No longer are facts accepted, just because they exist. Today we are free to dismiss facts if we don’t like them, or if we find them inconvenient.

Science - the systematic building of organized, tested knowledge is dismissed by ideologues who don’t like the conclusions, or who have religious objections to them. Once ours was a country that enthusiastically taught and venerated science, but somewhere along the way, religious fundamentalists started chipping away at it, because of evolution, and then it became a bone of contention when it came to climate change. The fossil fuel companies didn’t care much for the idea that they might be part of the problem, and so they provided a lot of funding to spread the gospel of ain’t no such thing as climate change. The anti-vaxxer crowd tried to tell us that vaccines caused autism – something many still believe. Now all things scientific are in doubt, because we’ve allowed the lunatic fringe to turn education into something questionable and elitist.

History can either be ignored or rewritten. The legendary civil war battle site, “The River of Blood” is memorialized at a Trump golf Course. Who can forget the Bowling Green Massacre? We’ve also seen plenty of rewriting. The deification of Ronald Reagan was years in the making. It wasn’t successful enough to get him on Mt. Rushmore (or Mount Clay) but it was successful in diverting attention from Reagan’s role in the Iran Contra affair. Reagan planted the seeds of government mistrust that have flourished over the decades, and Republicans smile with pride about that. They should be worrying about what happens in a country where the government can no longer govern, the inequality divide is expanding, and there are nuclear weapons lying about.

News stories we don’t agree with are now handily dismissed as Fake News, thanks to our president. He’s desperate for attention, but unless that attention is fawning and slobbering, it is Fake. When I was a schoolgirl, we were encouraged to read differing points of view, and make up our own minds. What a waste of time that was! Easier to pick out what we like, what we’re comfortable with, or what doesn’t threaten us.

Yes, truth has been taking a beating.

We’ve certainly seen that writ large in New Hampshire. The Republican Party had control of the NH House for 150 years. When they lost that control in 2006, the rumors of “busloads of people from Massachusetts” voting in our elections began. It was a steady drumbeat for a decade. In 2016 those drums became Lambegs when gubernatorial candidate Chris Sununu went on a radio show in Boston to bray about voter fraud. Days later he won his election – in fact the GOP seized control of all branches of the state government, despite all that alleged voter fraud.

Shortly after Trump took office, he started whining about voter fraud in NH, thanks to Trump sycophant Sununu, who paved the way. Donald Trump, the sorest winner in US political history was miffed because even though he won the election, he didn’t win NH, and apparently he was entitled to.

Now we’re dealing with the fallout from that bizarre pageant. Last year our legislature passed a ridiculous voter prevention bill. One of the provisions of that bill created a position for someone to play Nancy Drew and dig into the Mystery of the Unreturned Post Cards.

The person chosen for this new position is Orville “Bud” Fitch, who was an assistant AG, then left to work for Kelly Ayotte. A recent story by the excellent Mark Stern in Slate magazine provided some information about this new state employee. Mr. Fitch was resentful at being questioned, and provided little in the way of answers.  He refused to give Mark his job description, or describe how he’s going about doing it. Meanwhile, we’re paying for this – even though there is no proof of voter fraud.

At the same time, we have the audacity to wonder why there is political apathy among the young. They’ve learned that facts don’t matter. That justice is elusive for the non-wealthy. They can see that we have no interest in protecting the planet or their future. They have no hope of achieving the American Dream. And we have the audacity to wonder why there’s an opioid crisis. If nothing is true, nothing matters.

Posted by susanthe at 6:36 PM No comments: Links to this post 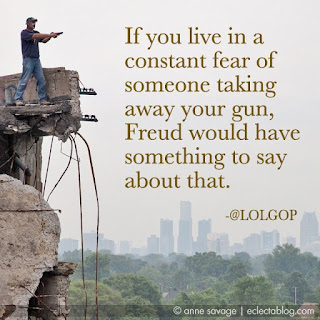 Our far right legislators love to talk about how much they hate big government. Big government imposes its will on the people, Big Government takes away the voice of towns, cities, and states… yesiree Bob, they hate Big Gummint…until they love it.

By the time you read this, there will have been a hearing on HB 1749, a bill that would remove the right of NH cities or towns to establish their own gun ordinances. Your town doesn’t want target shooting on town land? Your city doesn’t want guns on town property? Tough luck. The libertea gundamentalists are going to eliminate local control, and give that control to the state. That’s right - the same state they complain about all the time.

According to this bill, “the general court will have exclusive authority and jurisdiction by statute over the sale, purchase, ownership, use, possession, transportation, licensing, permitting, taxation, or other matters pertaining to firearms, firearms components, ammunition, firearms supplies, and knives in this state.”

Take that, taxpayers of Anytown, NH. Your town doesn’t get to make decisions about guns, ammo, or knives, because the legislature controls your town’s decisions. You still get to pay taxes, but if you don’t want Bubba and his drunken cousin shooting targets in the park, that’s tough luck.  In fact, they’ll probably be able to shoot at the school playground too, because the bill opposes banning guns at schools, and schools are public property. Nothing goes together like small children and firearms.

It’s a bold power grab. Lead sponsor JR Hoell has never respected local control, and the bill reflects his disdain. Line I makes a point of saying that NH is not a home rule state. That NH has a long-standing (nigh on to sacred) tradition of local control is of no interest to the parade of far right activists that have signed on to this. Free State Project mover Ed Comeau of Brookfield is the only sponsor from the top half of the state, an area where folks are pretty serious about local control. There are no sponsors from Grafton or Coos County. There’s a hearing on Wednesday, and the executive session will follow the hearing. The vote will probably be scheduled for the following week. They don’t want voters to know about this until it’s a fait accompli.

The other sponsors (from the bottom half of the state) include Representatives Al Baldasaro, John Burt, self-styled Constitutional expert Dan Itse, and James Spillane. Representative Michael Sylvia of Belmont is the other Free Stater sponsoring the bill. The founding document of the Free State Project calls for people to move to NH, take over and dismantle the state government, and then threaten secession. I trust I’m not the only one to see the humor in the would-be dismantlers of the state government, attempting to take local power away from municipalities and hand it to the state government.

They’re counting on the fact that voters aren’t paying attention, and if they hear about it at all, will interpret it as “nobody gonna tell me what I can do with my gun” and leave it at that.

The silence around this bill should concern all of us. There was endless publicity about “Constitutional Carry,” the name the out-of-state special interests came up with for eliminating the permitting process for concealed carry firearms. All the gun groups churned out continuous propaganda emails. The governor made it his very first legislative priority. To get a concealed carry license, a gun owner had to apply to the police chief in his/her town. The “Constitutional Carry” bill eliminated that step. It was the first step in eliminating local control. This latest move to disempower municipalities should come as no surprise.

It should come with rejection. This is the second attack on local control. If these radicals succeed, they’ll be further emboldened. What will be next? What will be the next erosion of local control engineered by the radical ideologues of today’s GOP? What do towns control that these folks hate? Hint: schools. I predict that will be next on their agenda.

There have been amendments proposed to the NH Constitution at different times to make NH a “home rule” state. Every time, the most vehement opposition comes from the liberty crowd. They hate big gummint, until they become the big government - and then they’ll do anything to protect and expand their power.

For years we’ve heard that it’s the evil liberals who want big government to control every aspect of our lives. It turns out that it’s the NHGOP that wants their idea of big government to run our towns from Concord. It’s a brilliant strategy. The average Republican voter would expect this from liberals, but never from his own party.

Dear Republicans: your demise is being engineered from within.

This was published as an op-ed in the January 12, 2018 edition of the Conway Daily Sun newspaper
Posted by susanthe at 6:28 PM 1 comment: Links to this post 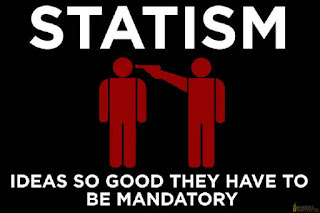 This bill revises the law on the state's authority to prohibit or regulate firearms, firearms components, ammunition, firearms supplies, and knives.  The bill also renders the selectmen's authority to manage town property subject to the provision of RSA 159:26.

In the Year of Our Lord Two Thousand Eighteen

Be it Enacted by the Senate and House of Representatives in General Court convened:

1  Legislative Findings and Purpose.  The general court finds that:
I.  New Hampshire is not a home rule state.
II.  Municipal ordinances and regulations regarding firearm regulation may differ from municipality to municipality which may place a citizen in danger of inadvertently violating the law.
III.  A growing number of towns and local boards are violating RSA 159:26.
IV.  The issue is a growing problem as in the last 6 months, the following events have transpired, all of which violate RSA 159:26:
(a) The board of selectmen of the town of Milford has banned target shooting on town land.
(b) The city of Lebanon school board is attempting to ban firearms in or on school property and at school events that take place on non-school property.
(c)  The Lebanon police department has pledged to enforce the illegal gun ban enacted by the Lebanon school board.
V.  It is in the best interest of the citizens of the state of New Hampshire for the resources of local units of government to be used to enforce current law and not to waste time enforcing decisions that are in clear violation of statutes.
VI.  Repealing and reenacting RSA 159:26 to clarify the intent and further, to include penalties, will prevent these violations of state law.
2  Firearms, Ammunition, and Knives; Authority of the State.  RSA 159:26 is repealed and reenacted to read as follows:
159:26  Firearms, Ammunition, and Knives; Authority of the State.

Local control has always been sacred in NH. Past tense. Some municipalities are enacting gun ordinances for THEIR towns that the freedumb and libertea crowd disapproves of. This bill would remove local control and hand it to the legislature.

These people (especially Free Staters Ed Comeau and Michael Sylvia) all bray about gummint tyranny - but vote them into government and they become the tyrants.

GOP Favors Local Control Except When They Don't         h/t Tuck

Posted by susanthe at 3:25 PM No comments: Links to this post