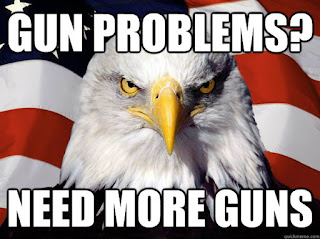 New Hampshire is one of the safest states in the nation, and we have a long and proud tradition of responsible firearm stewardship. Our laws are well-crafted and fit our culture of responsible gun ownership and individual freedom.

Later that evening,  in Derry, a 79 year old man shot and killed his wife.
Didn't  this guy know about the culture?

In the wee hours of Monday, August 12, Dover police are investigating gunfire in a street confrontation.
Just a little individual freedom fire. Nothing to see here.

The wee hours of Monday morning were busy. In Northwood, a man claims he shot at someone trying to break into his car. Shot 3 times and missed. The police searched the area, but didn't find anyone.

Thursday, August 15, a responsible firearm steward barricaded himself in a house in Claremont for 9 hours. Hundreds of  shots fired, but no one was injured.

Sunday, September 15, a good guy with a gun - a safety officer no less - wounded himself and another safety officer, at a shooting range in Keene.

On Sept. 20, a responsible gun owner barricaded himself in his house in Nashua for a few hours, before being shot by a cop and taken into custody.

A proponent of individual freedom shot off his gun in a men's room in a bar in Portsmouth on Sept. 20.

On Sunday, Sept. 22, a traditional firearm steward from Rochester, NH, drove to Massachusetts, where he shot and killed a guy at a bar.  (Hey, at least he did it out of state). Turns out he wasn't actually a law abiding gun owner, but of course, no one knew that till he pulled the trigger.

A double shooting in Concord, NH on the night of
September 25. A woman was found laying on the ground in a parking lot, after being shot in the head. A man was dead, slumped against the car. She died at the hospital. There is no official confirmation, yet, but  I think we all know how this story unfolds. The responsible gun owner shot her first, then killed himself.

On October 1, a pastor from a Pentecostal church (in Pelham) was shot and killed at his home in Londonderry.


October 18, a person was reported to have been found dead in a Jaffrey apartment in this very carefully reported story. There were two people, one dead inside, one outside in a car, and possible gunshot wounds. Since then, the story has been updated. Apparently the person who died was a high school student, as was the person outside in the car. The police believe that it was death by suicide.


October 12, two people were shot at the same Pentecostal church in Pelham that was home to the pastor murdered two weeks ago. It's being reported that a man and a woman were shot at a wedding, by a man with a handgun.

The story has been updated. The bishop performing the wedding ceremony was shot, as was the bride. It is difficult to imagine that this is unrelated to the death of the minister on October 1.

On October 27, a responsible firearm steward in Nashua killed his wife, and then himself. NECN
All these guns that are supposed to be making us safer don't seem to be doing much for women.


A guy in Chesterfield who shot up his neighborhood last year is refusing a competency exam, saying that they're trying to torture a confession out of him. Union Leader. I wonder why we don't charge guys like this with terrorism.

On Saturday, November 9, a responsible NH gun owner displayed his idea of individual freedom by threatening a driver on I-95 in MA  with his gun.

Why Aren't All These Guns Making Us Safer? 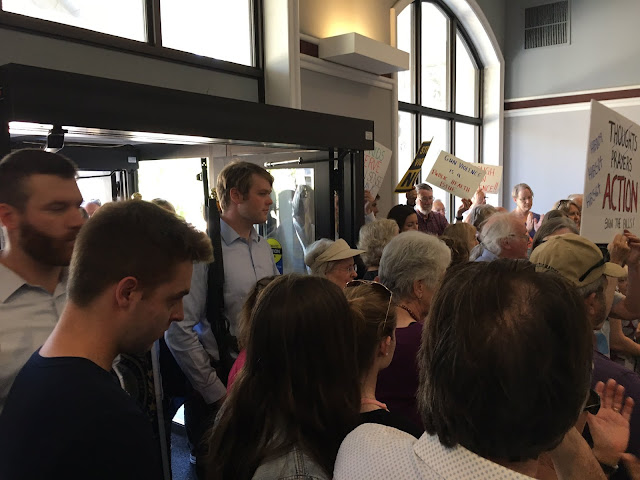 It was a deadly weekend. On Saturday, a gunman in a Walmart in El Paso, Texas, shot and killed 22 people, and wounded 26 more. Early Sunday morning, a gunman killed 9 people in a nightlife district in Dayton, Ohio.

The weekend before, a gunman shot and killed 4 people and wounded 13 others at the Gilroy Garlic Festival in Gilroy, CA.

I thought all these guns were supposed to be making us safer?

Meanwhile, here in NH, three gun safety bills languish in limbo, waiting for the attention of our governor. On Monday, August 5, there was a rally  at the Legislative Office Building in Concord, where members of gun safety groups and other concerned citizens called upon the governor to sign the bills. The room was packed with people.

Not everyone in the room was heartbroken about the slaughter of their fellow humans. Some attendees were so dickhurt by the idea that some people were talking about gun safety, that they showed up with their guns. The guy with the long gun in the photo is Brennan Robinson, a member of the Free State Project, who very obviously came in with the intention of turning the media's attention to him.

He succeeded admirably. Both WMUR and NHPR gave him the last word in their stories.

This is emblematic of the NH media, which operates with GOP as their default setting. I expect  it from WMUR - hell, I've seen it in the past, from the same reporter.

I cannot wrap my head around the shoddiness of this reporting. Not a single reporter who covered this event thought to ask, "Hey, pal - these folks are all here because of gun violence - do you think it's really a good idea to bring GUNS into a room crowded with people - especially since you fit the visual profile of a domestic terrorist?"

These are men who get up in the morning in the safest state in the country, and put on their strapons before they dare leave their houses. And we are all supposed to bow and scrape before their freedumb, because their right to play GI Joe is more important than our right to live.

I don't expect Governor Sununu to sign those gun bills. His first act in office was to sign a bill that repealed the concealed carry license process. Gundamentalists are his base.

I don't have any confidence that there will ever be a legislative solution to the wholesale slaughter, either at the state or national level.

What I do know is this - people are going to stop going out. They won't go to fairs, festivals, concerts, or movies. They won't go shopping in brick and mortar stores. They won't go to bars and restaurants. And brother, when it starts to hit the bottom lines of business - then we'll see some change. Capitalism may be what changes our gun laws.

To help along the process, I suggest that before you go to a store, a venue, a bar or restaurant that you call ahead and ask if they allow guns inside. NH is an open carry state - BUT - there's a provision built into the law:

"Businesses have the to right to ban firearms from their property, Merrigan said, and can ask customers who are carrying firearms, openly or concealed, to leave.
Customers who don’t leave a business when requested can be charged with criminal trespassing."

So call and ask, and decide for yourself whether you want to go there or not. If you see a person with a gun in a business - call the police. There is no way for you to know if he is one of the mythical "good guys with guns" or a domestic terrorist. Complaint to the management. Leave your shopping cart and walk out of the store.

Enough is enough. And dammit, NH media - do a better job.