FairPoint Communications announced this week that it would need more time to complete the takeover of Verizon’s telephone network in northern New England. The controversial sale of Verizon’s landlines to the small company took place at the end of March, after being approved by the Public Utilities Commissions of Maine, Vermont, and New Hampshire. Those who opposed the sale pointed out that FairPoint was too small a company to be able to efficiently take over the much larger Verizon.

The company was scheduled to assume total control of Verizon’s network in September. In order to do this, FairPoint would need to prove “an irrevocable notice of readiness” by July 7. The company admits that this isn’t going to happen. The date for the total takeover, or cutover as it is called in the industry, is November. Meanwhile, FairPoint is paying Verizon approximately $16 million a month in transition fees. This is on top of the $2.4 billion they paid for Verizon.

It has not been a smooth transition. Maine just fined FairPoint $25,000 for disruptions to the 911 system. There was a problem at the Penobscot Regional Communications Center in May that led to 911 calls being transferred to Orono. One woman in Penobscot County called to report her husband wasn’t breathing. She didn’t get an answer, and finally called her local rescue department. The problem seems to have been with the power supply, which has been replaced. In April and May there were problems with the 911dispatch system in Gray and Windham. There was a delay of up to an hour for 911 calls to be routed to a backup system. Apparently neither the personnel nor the equipment have changed since the FairPoint takeover. Naturally, this is of great concern to Maine lawmakers. The state pays FairPoint $6.45 million per year to provide 911 services under a 5-year contract previously negotiated with Verizon.

FairPoint’s transition is being supervised by Liberty Consultants, who point out that a number of Verizon employees did not transfer to FairPoint, and that FairPoint has made progress in hiring new employees, but needs to step up the pace. Based on my limited television watching, I can say that they’ve sure spent a lot on their advertising campaign, which seems intended to make me feel better about the sale. I’d feel better if they were spending less on ad campaigns and more on hiring and providing better service. I’d feel even better if my phone bill hadn’t gone up about $10 in the last two months.
The delay in the cutover means a delay in the rate decrease FairPoint had planned for August. Some $18 million in rate cuts had been negotiated, which would mean an approximate cut of $4.50 per month for residential customers and $6.00 for businesses. I can’t help but wonder how many other customers have already experienced the same rate hike I have, which apparently I’m supposed to forget about when (and if) I receive a rate cut of approximately half of the rate increase I’ve already experienced. The rate cut will be retroactive to whenever the cutover takes place.

We all know that the economy is bad. Unemployment is at record high levels, and people are scrambling for the low wage jobs that seem to be the only ones available. The cost of energy, and everything else is skyrocketing. When the Verizon FairPoint sale was being negotiated, naysayers (like me) warned that a small company taking on huge debt would be raising the rates and providing less service. The handwriting already seems to be on the wall before FairPoint has even taken over. I’m guessing that customers will drop FairPoint like a hot rock, and then what? As they lose customers in a shaky economy, our whole telecommunications system in NH will be in jeopardy.

I still don’t understand why this sale was allowed to happen. I attended several hearings. There was little testimony in favor of the sale. There was great opposition to it. Many state legislators opposed the sale. The consumer advocates opposed the sale, at least in the beginning. Still, apparently FairPoint/Verizon were able to grease enough palms to make it happen, despite all of the evidence that pretty much guaranteed that NH would become a dead end on the information superhighway. Without the investment in communications infrastructure, NH will fall behind the rest of the country. Without a national commitment to invest infrastructure, the US will continue to fall behind the rest of the world.

“I hate to be the one who told you this, but I told you so.” Larry Birkhead

picture from NHIndymedia
Posted by susanthe at 8:54 PM No comments: Links to this post 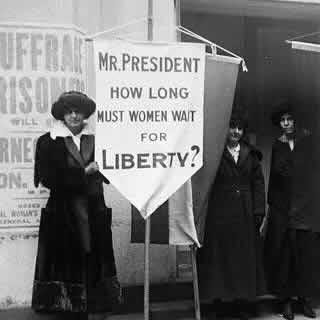 On June 4, 1919, Congress approved the 19th Amendment, (also known as the women's suffrage amendment) and sent it out to the states to ratify.

Women fought for over 70 years to gain the right to vote. Susan B. Anthony devoted her life to the movement. Elizabeth Cady Stanton began working for suffrage, and later moved into all areas of women's rights - while raising 7 children, at a time when there were no washing machines, computers, or telephones. She wrote at least 6 books, and innumerable pamphlets, periodicals, and other statements. These women were partners in the suffrage struggle, yet neither lived to see women get the vote.

Alice Paul was a leader in the last push toward the vote, heading the National Women's Party. Other suffrage groups at the time were focused on lobbying for individual states to give women voting rights. The NWP chose to lobby for a constitutional amendment. These young firebrands were not beloved by the women who had dominated the suffrage movement for decades. The women of the NWP had a huge suffrage parade on the day before Woodrow Wilson’s inauguration, hoping to take advantage of the expanded media presence in Washington. The parade was disrupted at several points by angry mobs. The police turned a blind eye to the violence of the mob. It is interesting to note that most men thought that women should stay home and be cherished little darlings, yet had no compunctions about beating them up in the streets.


In January of 1917, frustrated at Wilson’s unwillingness to promote (or even discuss) a constitutional amendment the women of the NWP began a silent demonstration in front of the White House. The daily picketing continued for two months, regardless of the weather. On March 4, over 1,000 women marched around the White House, on the eve of Wilson’s second inauguration. In April of 1917, the US entered WWI. By summer, the picketers began to encounter resistance. Demonstrating during wartime was considered an outrage, (my, how history repeats) and so the women began to be beaten, harassed, and arrested. Once again, the police ignored the violence against the women. Guantanamo Bay was not an option at that time, so the women were sent to a prison in Virginia. They demanded to be treated as political prisoners, and when their demands were ignored they went on a hunger strike. Alice Paul was put in a psychiatric unit (in an attempt to discredit her) and force fed three times a day. Word of the torture these women were undergoing did get out to the media, and traveled around the world, tarnishing the US reputation in other countries. Again, history repeats. After enough stories of torture and ill treatment were leaked the public pressure became strong enough that the women were released, and Wilson decided to support the suffrage amendment. (This a very condensed version of the story.)

Senator Clinton was often the subject of media sexism. There were endless comments about her appearance, her laugh, her tears, and her voice. The party who had the shrillest candidate of all – Ron Paul - dared to call her “Shrillary”. There were the Hillary “nutcrackers” for sale. The fear created by a powerful, ambitious woman is astonishing. On the other hand, sometimes gender worked in her favor. Clinton was not subjected to endless lapel scrutiny or ruthless questioning about her ongoing lack of a flag pin. Her church affiliations were ignored completely by the right wing corporate media – a media that seemingly embraced and supported her candidacy.

Now, we’re being told that angry Clinton supporters, feeling their candidate didn’t get a fair shake because of her gender, plan to vote for McCain. The mind boggles. We’re supposed to believe that angry feminists will cast a vote for a right wing Republican who has a terrible voting record on women’s issues and will most assuredly nominate more fascist activist judges to the Supreme Court to ensure his stated goal of overturning Roe v. Wade? I have a hard time believing that is even an option – that women would cut off their noses to spite their wombs. Any woman who is considering that should get out her copy of “The Handmaid’s Tale” and re-read it.

I’m grateful to Senator Clinton for her candidacy, and paving the way for the next woman to run. We’ve come a long way, baby.

For a detailed chronology of the National Women’s Party: http://memory.loc.gov/ammem/collections/suffrage/nwp/detchron.pdf
Posted by susanthe at 11:32 AM No comments: Links to this post