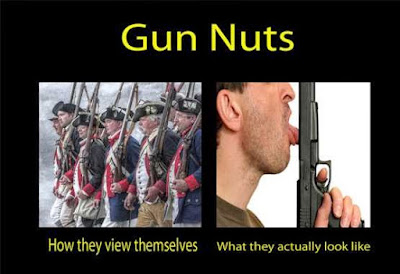 The new legislature has been sworn in, and will be back in session on January 2.

As I write this, there are 894 LSRs. An LSR is a fledgling bill that is written by the sponsor, and then sent to Legislative Services to be fleshed out and checked out. It is assigned a number and published. It will be assigned to a committee, have a hearing, and be voted on. House members have submitted 609 LSRs, and 204 have come from the Senate. Another 71 LSRs were withdrawn before they ever became bills. There are ten proposed amendments to the NH Constitution.

Some are predictable. One wants to change the NH Constitution to stipulate that taxpayer funds can’t be limited to supporting public schools. As we learned last biennium, taking money out of the public schools will mean dramatic increases in property taxes, but our libertea brethren don’t care about that.

There’s a proposed amendment that would stipulate that any broad based tax should be prohibited. Another would alter the state constitution to prohibit a tax on personal income from being enacted. A recent report finds that NH has the third highest property taxes in the US. This kind of GOP policy will help ensure that we reach first place.

Another amendment would reduce the number of representatives in the House, and another would allow compensation for legislators to be determined by a joint resolution with the approval of the Executive Council. It seems our “live free or die” legislators want a bigger paycheck. Another would enshrine the right to hunt, subject to laws promoting sound wildlife and conservation management.

There is also a proposed amendment that would allow no-excuse absentee voting for NH residents. Perhaps the most important amendment would establish an independent redistricting commission to draw boundaries for state and federal offices. Why does this need to be a constitutional amendment? So that neither party can undo it on a whim. The state senate districts have been ridiculously gerrymandered. NH Republicans have historically opposed the creation of an independent commission, probably because they’ve done most of the gerrymandering. All of the proposed amendments have a long way to go before we ever see them on a ballot.

The first year of the biennium is the year that the next state budget is worked out. The House and Senate have both decided to continue to have Thursday voting sessions, something that began during the last biennium. Former Speaker Terie Norelli introduced mixed party seating during her second term. Her hope was that legislators would get to know one another and form relationships that transcended party affiliation. That’s been the custom since. The Republicans asked Speaker Shurtleff to restore party segregated seating, so that they can sit together, and maintain the kind of discipline needed to meet Minority Leader Dick Hinch’s stated goal of disruption and delay. Shurtleff has agreed to their request.

The GOP gundamentalists are getting all ginned up to fight about a proposed rule change that would forbid concealed carry firearms in the House chamber, anteroom, coatroom, or in the House Gallery. It’s understandable. Republicans who carry have shown an inability to holster their guns properly, as we saw when Kyle Tasker’s gun fell to the floor in a meeting of the Criminal Justice and Public Safety Committee. He’d been playing quick draw out in the hallway, and failed to secure one of his holsters. Tasker carried a gun under each arm, because you can’t be too safe in dangerous NH. The last gun drop was made by Representative Carolyn Halstead whose gun fell out of the back of her pants in a hearing on full day kindergarten that was filled with parents and children. Kyle Tasker is in prison on felony charges and Halstead was not reelected, so there is an opening for a GOP gun dropper. In most public buildings where unstable persons are likely to be present (courthouses, planes, NRA conventions) concealed firearms are not allowed.

As anyone who has ever attended a demonstration at the State House knows, a sign on a stick is not allowed inside the building. That’s right – the State House is a stick free zone, and I’m certain we’re all safer as a result. The last stick massacre was a national tragedy. 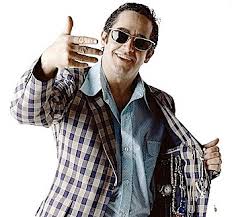 There’s going to be a lot to pay attention to in the coming biennium. Keep an eye on the story of the funds raised for the governor’s inauguration, and how the unspent funds were dispersed to the governor’s family members, advisors, and – of course, to himself. It appears to be near Trumpian level grifting, right here in River City.

It’s a shame we’ve abandoned all interest in expecting our elected officials to avoid the appearance of impropriety. Let’s insist they do better in 2019.


This was published as an op-ed in the December 28, 2018 edition of the Conway Daily Sun newspaper

I live in New Hampshire, the first in the nation primary state. This means that every candidate intending to run for president will bombard me, and my fellow residents, with mail. The first one came this week.

John Delaney is a congressman from Maryland. He's a Democrat. He chose to introduce himself to me with this mailer: 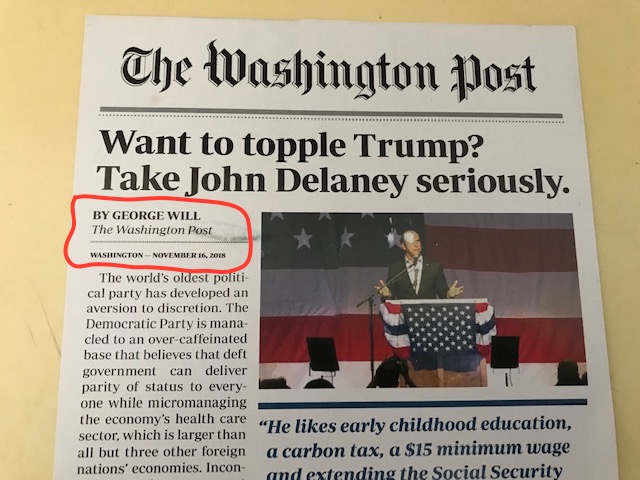 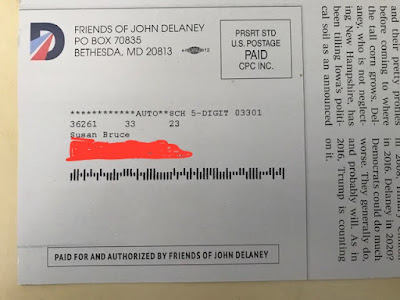 The George Will column makes this point:

"Suppose, however, Democrats are more interested in scrubbing the current presidential stain from public life than they are in virtue-signaling and colonizing the far shores of leftwingery."


I'm registered as an "undeclared" voter. I can only assume that by choosing George Will as his intro, John Delaney is trying to appeal to the more conservative faction of undeclared voters, not those of us who proudly reside on the far shore colony.

In 2014, George Will wrote a column about campus rape that should have caused him to lose his job. Mysteriously, after years of racist, sexist, and homophobic commentary, he remains employed. He's the poster boy for privileged white men endlessly failing upward.

By choosing George Will as his intro, I can only assume that John Delaney isn't interested in appealing to women.

It's working for me.


That humble, working guy persona Delaney cultivates appears to be fiction, according to those pinkos at Forbes.


Here's a  blog post I wrote in 2014 about Will's column. (Language warning for the easily offended.) 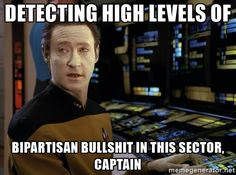 Oh, how we love that word! How we love that concept. How often we invoke the desire to see our elected officials reach across the aisle and get things done, because surely bipartisanship is the way things happen.

If we dig a little, we learn that it has happened a few times. Ronald Reagan and Tip O’Neil famously worked together to protect Social Security. John Boehner and Nancy Pelosi teamed up on passing the ACA. Of course, that was after Boehner and McConnell announced their intention to block and delay everything coming from that oft-touted other side of the aisle, in their effort to make Obama a one-term president. Oddly, no one in the media seemed to call them out on their stated goal of ignoring and subverting bipartisanship. It was no big deal that Republicans had no intention of reaching across the aisle. By this time, we didn’t expect it from them anymore. By this time, bipartisanship was a one-way street, populated only by Democrats.

That’s where it remains.

Democrats are expected to fall all over themselves to compromise. In fact, they’re expected to completely cave in to GOP demands. That’s what we call bipartisanship, but it could be more properly referred to as capitulation. There are whole “bipartisan” groups dedicated to this philosophy. No Labels claims to be dedicated to bridging the divide. In 2017 they launched the No Labels “problem solver caucus,” comprised of equal numbers of Republicans and Democrats who would work together on ambitious bipartisan proposals. They also gave out “Problem Solver Awards.” They gave one of those awards to Donald Trump, who has never solved a problem in his life. No Labels always seems to be advocating for the position of the right. I can’t think of a time when they’ve taken the other side. Nope, they want to do things like gut Social Security and Medicare, policies that aren’t popular with most people from either side of the aisle.

We’ve seen similar antics in Concord. When the Tea Party Junta took over the State House and installed Bill O’Brien as Speaker, all possibility of reaching across the aisle flew out the window. That was when the Republican Party began the slow descent into the kind of madness that caused them to elect an incoherent game show host as President of the United States.

Yes, this is New Hampshire, a state where the media default setting is GOP, and so since the new Democratic majority at the NH House elected Steve Shurtleff the media focus has been on bipartisanship. A Seacoast online headline read, “Speaker Shurtleff Offers Refreshing Bipartisan Message.” I guarantee you this headline would never have been written if the Republicans had kept the majority.

It took nearly a week for the speech made by Representative Dick Hinch, the new GOP minority leader to get any media attention. It was not a “refreshing message.” Hinch began with a little lip service about unity and working together for the benefit of the state, then quickly moved on to his real message. Hinch told his caucus that their primary duty is to make sure they take back the House in 2020 so that they can gerrymander districts to ensure they keep the majority for the next decade. He urged the caucus to be disruptive at every opportunity.

This speech didn’t even merit a mention in most of the NH media. Those that did carefully danced around Hinch’s speech, sanitizing it for GOP protection. The exception to the rule was long time NH political reporter Garry Rayno who reported on the content of Hinch’s speech, at Manchester Ink Link. Why didn’t other NH media cover it? GOP is the default setting of the NH media. They are always protected and never held to the same standards that Democrats are. Stories of GOP bad behavior seldom splash across the headlines unless the story is picked up by national media, as we have seen time and time again, most recently saw with (former) Representative Porn Star.

Republicans aren’t expected to behave in a bipartisan way. They will not be held accountable for the kind of disruptive, delaying tactics they’ll be engaging in on the House floor this year. Those tactics won’t even be mentioned in the news coverage of House sessions. The further north one travels in the state, the less likely one is to get any coverage of the goings on in the state house. Democrats are supposed to knuckle under to the demands of the GOP, because doing their bidding is their definition of bipartisan.

Most of us want to have a representative body that will work hard to do what is best for New Hampshire. If we’re going to cling to the myth of bipartisanship, let’s insist that it be a two way street – in the legislature and in the media. 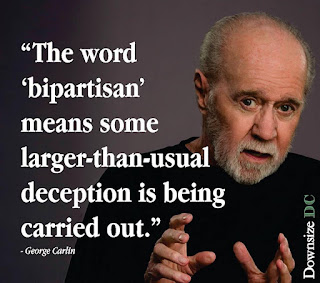 Published as an op-ed in the December 14 edition of the Conway Daily Sun newspaper.
Posted by susanthe at 6:21 PM 1 comment: