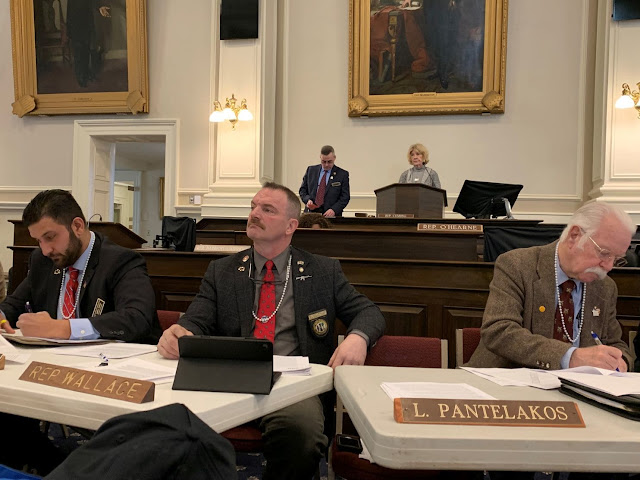 
We humans are social animals. We like to live in cities or towns, and in neighborhoods. We join churches, we join choirs, we join clubs, gyms, book clubs, professional associations, athletic teams and leagues, Boy Scouts, Girl Scouts, groups of collectors, boards of directors, retired military organizations, fantasy sports leagues, car clubs, gun clubs, gardening clubs – you get the idea. We’re joiners. We like to find people who share our interests and hang out with them.

If we are musicians, we find people to play the same kind of music we want to play.  We find people who like the same sports teams we do and we watch games with them. We find people who share our political beliefs and we associate with them. And with all of that can come uniforms, team jerseys, patches, badges, buttons, or pins. In addition to joining, we also like to identify ourselves as belonging.

Some people get deeply involved. We see middle-aged men wearing jackets for sports teams they never played on. Some of the faithful wear shirts with the name and number of their favorite player. We see supporters of political candidates wearing buttons and tee shirts, but the real die hards may have invested in hats, tote bags, even jewelry. That’s typical for a great many things - we have badges and pins to proclaim our various allegiances.  The 1999 movie “Office Space,” featured a chain restaurant called “Chotchkies,” where employees were supposed to wear at least 15 badges, buttons, or pins. In the movie it was called “flair,” which has stuck as a slang term for having a lot of pins, buttons, or badges on a hat, a vest, or a lapel. Excessive flair is usually a male condition.

We’ve brought our vehicles into the statement making party. Trucks can be seen actually flying flags: usually US, but also Confederate or Gadsden.  Bumper stickers make statements – either manufactured or homemade. We can all see how people feel about politics, food, kids, peace, dogs, and all religions, including guns.

That’s the segue, folks. A couple of weeks ago, there was a rumpus at the NH House because some of the least charming members of a right wing NH women’s gun club handed out pearl necklaces to members of the Criminal Justice and Public Safety Committee. The Committee was going to be hearing testimony on a gun bill. The members were urged to wear them “in support of second amendment rights.” One of the members of the committee was already wearing lapel flair that included a large AR-15 pin. These manly, gun-totin’ guys donned the pearls. 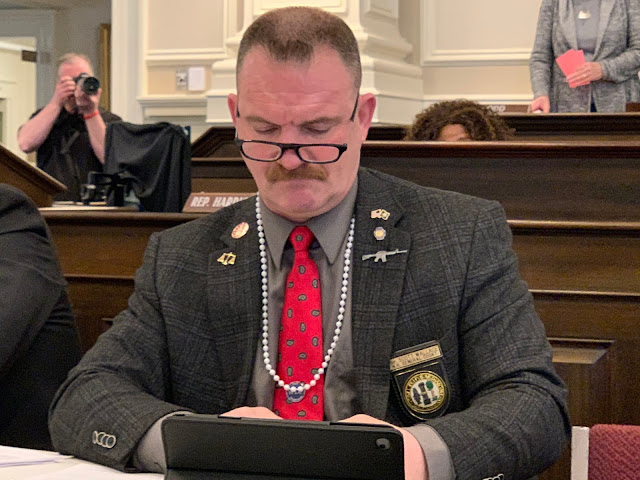 photo of the rather over-accessorized Rep. Scott Wallace from the Washington Post

In a representative democracy, we the people elect representatives to go to the State House and represent our interests. Most of us expect them to go and behave in a professional manner – one that doesn’t embarrass the voters of the district. We expect them to behave like adults, not boys going to a meeting in their secret clubhouse with decoder rings.

This is an increasingly unrealistic expectation. In recent years the amount of flair in lapels has expanded to include all manner of political statements  - from gun pins to abortion. A NH voter coming to speak before a committee on a matter that concerns them can often get a read on how many members of that committee have closed minds, just by looking at lapels. It doesn’t end with flair. A national group whose goal is the destruction of public education hands out big, ugly yellow scarves to receptive legislators, who wear them in support of that goal. The gundamentalist girls handed out their pearl necklaces. Committee room tables can be populated by people so laden with signal sending trinkets it looks like right wing Mardi Gras.

In 2016, the Republican controlled state legislature passed HB 1503, which prohibits the wearing of campaign stickers, buttons, pins, or clothing inside the polls. The sponsors claimed that wearing a campaign button was an attempt to influence other voters. Yes, folks, that’s right – you can’t wear a campaign button at the polls because it might influence other voters, but the candidates you elect can bedeck themselves with gewgaws proving they’ve already been influenced and are now just mocking the legislative process.

Adult behavior is in short supply. This week, during a floor debate on a gun bill, the Republicans got up and left the room. A bill on repealing the Education Tax Credit, which is used for funneling tax dollars to private religious schools caused the legislators who oppose public education to get out their yellow scarves and wear them to work. The Speaker (finally) informed representatives that those wearing “props” would not be allowed to wear them while debating on the floor.

Most workplaces expect adult, professional behavior, and frown on the wearing of bizarre, clownlike accessories. We really should be able to expect the same of our state representatives.


published in the March 22, 2019 edition of the Conway Daily Sun newspaper


For more on legislative behavior:

The House Majority Leader tried to discuss civility with his colleagues. The minority party didn't take kindly to it as Nancy West reports for InDepthNH.org 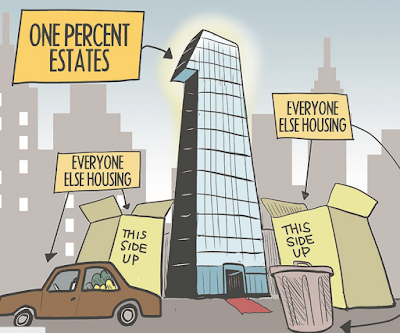 In Oregon last month, Governor Kate Brown signed a statewide rent control law. Like many states, Oregon has a shortage of rental properties. This law caps annual rent increases to seven percent plus inflation, which amounts to a limit of about 10 percent this year. It also exempts new construction for 15 years, and landlords may raise rent if renters leave. This isn’t doing a whole lot to help anyone, which is why landlords didn’t fight it. They were more afraid that the state would remove the current ban on local rent control policies. It will do little to help those who are at the low end of the income scale, who will continue to spend upwards of half of their income on rent.

The budget calculation formula from the 60’s that is still in use today, warns that we should spend no more than 30 percent of our income on rent. Anyone who spends more than that is considered “cost burdened.” Anyone spending 50 percent or more is considered “severely cost burdened.” It is not the wealthy that are “severely cost burdened.” It is your barista, the clerk at the cash register, the server taking your order, the person stuffing you into a chairlift, the person who cares for your grandmother - the workers of the service economy that we all rely on. It might also be your grandmother. Elderly people are a fast growing segment of the homeless population.

A 2018 report by the New Hampshire Housing Finance Authority found that NH has a rental property vacancy rate of 1.96 percent. A vacancy rate of 4-5 percent is considered a balanced market for supply and demand. The survey found that the median rent for a 2 bedroom apartment has increased 19 percent over the last five years. In Carroll County that increase was 11.7 percent. It was 31 percent in Coos. The last recorded vacancy rate for Carroll County was 1.4 percent in 2016. The sample rate has been too small for the study for the last two years.

The 2018 report from the National Low Income Housing Coalition found that a minimum wage worker earning $7.25 an hour would have to work 96 hours a week to afford a one bedroom rental. The average wage of a NH renter is around $15 an hour. The wage needed to afford a two bedroom rental is $22.32. Right now, the average rent for a one bedroom in NH is around $900. It’s upwards of $1200 for a two bedroom.

In addition to having very high housing costs, NH also has very low unemployment. So far that low unemployment has done little to raise wages. Employers are only now starting to grasp that housing is a big part of their problem. Housing is one of the many problems that New Hampshire has been ignoring for decades. Adequate housing might mean people with kids and that means funding their education. We fund education through property taxes, and NH has the second highest property taxes in the nation.

When the economy collapsed in 2008, people lost their houses and moved into rentals. That caused prices to skyrocket. The collapse of the economy created the so-called “sharing economy” where desperate folks were trying to monetize their possessions by ride sharing or renting out rooms in their houses. Airbnb caught on, and quickly became a way for privateers to buy up housing and rent it for big bucks. Both events meant fewer rentals for working folks. A lot of the people whose finances were destroyed in 2008 never got back to where they were. The jobs created in the aftermath of the 2008 economic collapse were largely low wage service jobs. While rental costs have increased in NH by 19 percent over the last five years, for most workers, wages have not. Homelessness, however, has increased by 10 percent in the last 4 years.

NH has a problem. We have an aging population. We have a housing shortage. We have a lot of low wage jobs. Raising the minimum wage would help, but it won’t solve the housing shortage. Even if we raised the minimum wage to $22 an hour, there still wouldn’t be enough housing. Some ideas: there should be no new commercial construction that doesn’t include housing. Building an outlet? Build up: stores and restaurants downstairs. Housing upstairs. That should be true of every single ugly new store built along the Rt. 16 strip. Locally, there are many empty buildings. Some of them have been empty for years. Turn them into housing.  (Also, build more housing.) A tourist economy needs workers. An aging population needs caregivers – and housing, unless you want Granny living in her car. Until then, there are many helpful YouTube videos on how to live in a car. 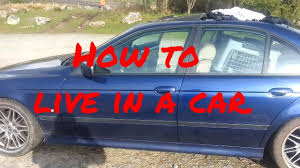 Published as an op-ed in the March 8 edition of the Conway Daily Sun Newspaper
Posted by susanthe at 9:31 PM 4 comments: Links to this post