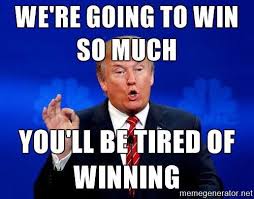 Donald Trump’s campaign slogan was “Make America Great Again.” It’s proven to be popular among people who couldn’t tell you when America was great, or what happened to make it not great. His cultish supporters have followed him to Twitter, where they tweet out inanities with hash tags like #MAGA, and #winning. They boast of “owning the libs.” Everything is a game to be won. One might wonder, how is all that winning coming along?

Congress passed the Trump Tax cut in December of 2017. Somehow the president managed to sell the concept that lowering corporate tax rates and taxes for the wealthy would benefit all of us. The Republican Party has been trying desperately to make trickle down economics work since the Reagan administration, even though it’s been a spectacular failure. The Trump Tax cut was trickle down on an enormous scale.

Trump told us that his economists estimated that the typical family would see an increase in income of $4000. We heard that statistic a lot. What typical family wouldn’t want to see a $4000 increase in annual income? Not only were workers going to get a break on their taxes, their incomes were going to increase, because their employers were going to get huge tax cuts, and would be passing on the largesse.

How did it all pan out? The Bureau of Labor Statistics just issued a report on earnings through May 2018.  Real average hourly earnings decreased by 0.1 percent. In other words, workers who are not bosses are making less than they did last year. The hourly wages of mid-class employees (production and non- supervisory workers) is up 0.4 percent, or about a dime an hour. As Jared Bernstein of the Center on Budget and Policy Priorities put it, “At this rate, that tax-cut induced $4,000 in your paycheck will take 28 years.”

Who could have imagined that corporate America, given a huge tax cut would choose to pocket their profits, and not trickle them down? Anyone who has been paying attention since the Reagan administration rebranded it as “supply side economics.”

Meanwhile, back in the real world, inflation is at a six year high, which means that extra dime you got isn’t going to go very far. That’s unfortunate, because nearly everything is going to cost more, thanks to the Trump tariffs.

A recent piece in the Union Leader by Michael Cousineau took a walk through areas where NH is already being hurt by the tariffs. A Newington company that was shipping 50,000 pounds of lobster to China stopped getting orders after a 25% tariff was placed on US lobsters heading to China. Lumber and steel tariffs are making building materials more expensive, which means that housing costs are increasing, in a state that already has exorbitant property taxes and a lack of affordable housing. A company in Thornton that sells equipment for measuring wind and rain is abandoning their plan to expand. The tariffs may even have an impact on BAE systems, since US defense contractors are supposed to comply with federal regulations that specify requirements for materials. Our Trump supporting Governor, Chris Sununu, whose favorite slogan is “New Hampshire is open for business,” has been largely silent on this subject.

And speaking of winning, I would be remiss if I left out the Wayfair decision. Republicans schemed and manipulated to make sure they got the Supreme Court they wanted – and now Republicans living in sales tax free states are reaping their reward.  After decades of avoiding the collection and paying of  sales taxes to other states that they shipped products to, the Supreme Court addressed the issue of fairness, and found that remote sellers could avoid the regulatory burden of tax collecting and offer lower prices, thereby giving the non-sales tax states an unfair advantage.

Naturally, the outcry was loud and instantaneous. It seems our NH Republicans thought that the Supreme Court they lied and cheated to get would mess up some other guy’s state – certainly not their own! The governor convened a special legislative session, and has pledged (what else?) to fight this decision. The draft legislation argues that it all comes down to fairness. Yes, they wrote that with a straight face, after decades of benefitting from an unfair advantage.

It’s safe to say that there will be at least one expensive lawsuit as a result of this. Our Republican legislatures historically prefer to pay for long, drawn out  taxpayer-funded lawsuits (can you say Claremont?) than attempt to govern effectively.

On the national level, our leader is now attempting to take back remarks he made to Russian leader Vladimir Putin with all the skill of a third grader claiming the dog ate his homework. I hope we survive all this winning.


Published as an op-ed in the July 20, 2018 edition of the Conway Daily Sun newspaper.

Posted by susanthe at 9:24 PM No comments: Links to this post 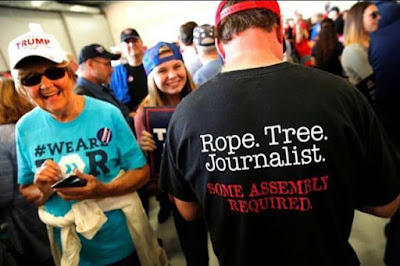 This year (so far) 53 journalists have been killed around the world. Eleven have been killed in Afghanistan, one in Syria, seven in the US, five in India, four in Yemen, six in Columbia, six in Mexico, two in Brazil, one in Liberia, one in Iraq, one in Pakistan, two in the Philippines, and one in Nicaragua.  Last year 46 journalists were killed, worldwide. The International Federation of Journalists promotes a free press and keeps track of journalists who are  killed in every country.

Every Friday, this newspaper asks a question, and readers are encouraged to call in with answers, that are then published on the following Tuesday. The question asked last week was: “Do you feel the political climate in America puts journalists’ lives at risk?” The answers were troubling. Most blamed journalists for the current violent climate. In other words, if journalists are killed, it’s their own fault. It’s the old “she was asking for it, dressed like that” justification applied to reporters.

The Capital Gazette in Annapolis seems like a good community paper, the kind of paper any metro area would be proud of. An angry, unbalanced guy was mad that the paper covered a 2011 court case where he pleaded guilty to harassing a former high school classmate. Like most mass shooters, he was a misogynist. He began stalking her online in 2009. Her lawyer called it the worst case of stalking he’d ever seen.  Jarrod Ramos harassed the lawyer and members of his family. Ramos went on to try to sue the woman for perjury, and tried to sue the paper for defamation. After his suit was dismissed in 2013, he turned to making verbal threats against the paper, the publisher, and various reporters. Last year he legally bought the gun he used to kill 5 people. It took him a long time to take action. Did the president calling the press “enemies of the people” set him off? We’ll probably never know. It sure didn’t help.

The Tele-Talk responses illustrated how desperately we need to teach media literacy in school. Many people don’t know the difference between a reporter and an opinion columnist. (I am an opinion columnist. I am not a reporter.) These days news someone doesn’t like is “fake” or “lies.” Over 30 years ago the radical right began to undermine the press, beginning with Rush Limbaugh and his howls about “the liberal media.” His propaganda worked brilliantly. Soon right wing radio sprouted across the land, and the war on truth began in earnest.

The slow, painful death of the newspaper hurts our communities and our nation. Since the beginning of the United States, newspapers and other print media kept us informed. They weren’t known for being fair and balanced back then, either. (Read some of Ben Franklin’s work.) The undermining began in earnest with the election of Barack Obama, which spawned a cottage industry of stories about his fake birth certificate, his fake Social Security number, Michelle Obama really being a man, and so on. It’s become so ubiquitous that now any new story that you don’t like is labeled as fake news.

No news source can be all things to all people. Readers are going to see stories in newspapers that tick them off. Coverage of arrests and court cases is an area fraught with peril. It’s a sure bet that someone involved with a case, especially a case related to violence against another is going to get mad about the way it’s covered. That’s always been true.

The difference now is that after 30 years of intentional undermining, the mad are even madder, and the current political climate has given them permission to not only threaten violence, but to accept it as being justified. In 2016, tee shirts reading, “Rope, Tree, Journalist: Some Assembly Required” began appearing at Trump rallies. It’s just a joke, you say. Tell that to the five dead people at the Capital Gazette.

Many of us who put words out in public are familiar with death threats. There are many, many unstable people out there with guns, which is why the Tele-Talk responses were so disturbing. Angry, unstable guys with guns and defamation suits are not as unusual as one might think, and there’s no way of knowing whether they’ll come calling with a gun or not. So far, as a nation, we seem content to ignore warning signs. The signs were certainly there in the case of Jarrod Ramos. It seems we’d rather ensure the right of a guy like Ramos to purchase a firearm than ensure the right of others to keep on living.

This nation used to pride itself on a free press. We used to venerate the First Amendment to the US Constitution. Somewhere along the way, we decided the Second Amendment was more important, and that if we didn’t like the practitioners of the First, we could use the Second to eliminate them. This, dear readers, is not what democracy looks like.

Published as an op-ed in the July 6 edition of the Conway Daily Sun newspaper.

This is the Tele-Talk column that got me thinking.
Posted by susanthe at 7:40 PM 3 comments: Links to this post