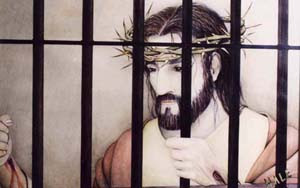 Few amongst us are saintly enough to avoid a chuckle when those who place themselves high above us take a moral tumble. We’ve all seen plenty of coverage of the bathroom antics of Senator Larry Craig. Some readers will remember TV evangelist Jimmy Swaggart blubbering on national television, after getting caught with a hooker, or former Arkansas Representative Wilber Mills, who failed to run for re-election after exotic dancer Fannie Fox (the “Argentine Firecracker”) leaped from his car and jumped into the tidal basin in DC, in an attempt to elude the police who had pulled Mills over for speeding. Let’s not forget Pastor Ted Haggard and his meth buying and male hooker massaging. When those who make a point of sticking their morality in our face are caught with their bathroom stance a little too wide – it’s hard to resist the urge to snicker.

On the subject of Senator Craig – one reason this was all so funny was because his story was often juxtaposed with old footage of him calling Bill Clinton “naughty.” Well, there was also his silly story about the “wide stance.” If you’re sitting with your pants down in a confined space, how big can your sitting “stance” be? And why don’t the Republicans grasp the simple concept that if it were okay to be a gay Republican, they wouldn’t have to work so hard to keep the closet door locked?

We’ve certainly had our share of local cases. Who can forget Walter Preble’s miraculous jailhouse conversion to Christianity? Preble was arrested in the 80’s after being convicted of distributing drugs. He was caught with a whole lot of marijuana on a private plane. While incarcerated, he, like so many, found Jesus. Some readers will recall his letters to the editor, praising the Lord and damning the homosexual. Those letters made many of his former customers laugh their way into clean underwear. The letters tapered off, and so, apparently, did Walter’s connection to Jesus, since he was arrested earlier this year. He must have been sampling his own wares, since he stopped at the police station (always the thing to do when one has outstanding warrants) to report a traffic accident. The police found most of what he owned in the car, as well as his passport and a suitcase full of marijuana. Marijuana is proven to cause short term memory loss – and this case would seem to back that up. Preble forgot about Jesus, and forgot about his outstanding warrants. Now that he’s back behind bars, will he turn again to God – or will he try something more original?

The jailhouse conversion isn’t anything new – as long as there have been prisons, there have been people wailing and moaning that they’d seen the light. The latest celebrity conversion is Michael Vick, the NFL player who is facing federal charges of running a dog fighting operation. Vick has stated that he also executed injured dogs. He may be looking at spending some time in the big house, so before he loses the multimillion dollar salary and endorsements, he’s preemptively asked Jesus for forgiveness and turned his life over to him. I’m sure he really means it – that the money and perks mean nothing to him. *cough*

Paris Hilton was seen toting a Bible around before her jail term for violating probation, but during her 23 day stint in jail, she called Barbara Walters to share how debilitating her experience was, and how God was giving her another chance. She told Walters “I am a changed woman.” It seems to be true. Since she rejoined the party circuit of the idle rich, we have seen no pictures of her without panties. We should all give our thanks to God, Allah, Buddha, and the Flying Spaghetti Monster for that.

Manuel Noriega had a portable baptistery set up in a courtroom, and was given the full immersion by security guards, during his prison stay. Is he sincere, or is this opportunistic? Stay tuned – Noriega has more jail time ahead of him. Finding Jesus may have saved Oklahoma bombing conspirator Terry Nichols from the death penalty. Is Nichols for real, or trying to stay alive? We may never know, since he’s unlikely to ever see the outside world again. To be fair, the conversions aren’t always false – Nixon operative Charles Colson came out of prison and began a prison ministry.

Another local favorite was Kevin Deschenes, who had a lunch truck business called “Daily Manna.” He drove that lunch truck like a lunatic – speeding and running people off the road. Jesus must have been telling him to put the pedal to the metal. Jesus also seems to have told him that he needed to supplement his business by selling marijuana. When he was arrested, the police found over $4000 worth of pot, cash, and drug paraphernalia. At one point he tried to tell the cops that the marijuana was for Christmas presents. I guess it’s possible that all of his family and friends have either HIV/AIDs or cancer. Perhaps I’m too cynical – but invoking Jesus in an attempt to save your bacon has been done to death.

It’s awfully hard to take any of these people seriously. It will be interesting to see if Jesus helps Michael Vick beat the rap, or lessen his sentence. Time will tell how serious any of these conversions are, and in the case of Preble - time and letters to the editor. I can’t wait!

“God: The most popular scapegoat for our sins.” Mark Twain
Posted by susanthe at 11:35 AM

You know...its just a damned shame the dumb asses who represent the masses. There are some very fine Christian folks running around this country. People who dont judge, dont point fingers, and do as the book says. But who represents them? And then there are the Republicans. Some good ones of them running around as well but who rep's them...you get my point. Good article, Susan...
AB9

It was really difficult for me not to just enjoy reading this but also to refrain from gloating. When driving down South it's impossible not to notice the huge tall crosses erected conspicuously of course at the side of the highway. These are revered by those same individuals who indulged in slavery and still hold their confederate flag on high. Let us not forget the US General in Iraq at the start of W's war who said "Our God is better than your God". The Republican party remains the highest and best example of hypocritical religious behavior. They give athiests more fodder than satan himself.