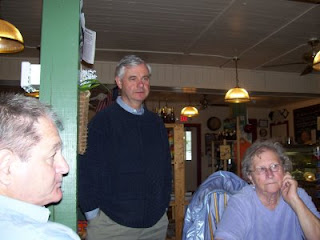 This morning former NH CD1 Congressman Jeb Bradley visited the J-Town Deli in Jackson, at 8:30 am. Bradley was greeted by a small group of Democrats, Independents, and Republicans. Did I say small? There were six of us.

During Bradley's last term, Congress was working a 3 day week. When the Democrats took over, they pledged a 5 day work week, which Jeb says is a promise they haven't honored. When asked about the policy that prevented solar and wind power generation on public lands, Bradley responded by attempting to compare that with Cape Wind - the windmills proposed for off Nantucket that have been bitterly fought against by the wealthy residents of the island, including Senator Edward Kennedy. I pointed out that the two were hardly comparable, but Jeb was unwilling to acknowledge that. Bradley and his staff of 3 left for other unspecified destinations in the area.

In today's Conway Daily Sun is a letter from a Bradley supporter in Wolfeboro who mentions Bradley's stance on immigration. Most folks I talk to in Carroll County are worried about heating their homes this winter. As usual, Bradley and his supporters are out of touch with the concerns of average voters.
Posted by susanthe at 12:43 PM