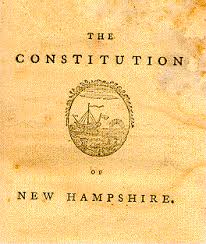 November 6 is Election Day. This year on the ballot there will two proposed amendments to the NH Constitution. They are CACR 15 and CACR 16.

Every year a number of potential amendments are filed. Some are filed every biennium, despite their lack of popularity. That’s what you get with a 400 person volunteer legislature. In order for a CACR to advance to the ballot, the bill must receive a three-fifths vote in the House and again in the Senate. In order for the state constitution to be amended, two-thirds of the voters must vote in favor of the amendment.

CACR 15 is titled, “relating to legal actions. Providing that taxpayers have standing to bring actions against the government. This means that anyone eligible to vote would have the standing to sue over the government’s use of revenues, without having to prove they were harmed by the expenditure in question. In the past courts have dismissed cases on the grounds that the person doing the suing wasn’t personally injured by the expense. The example used most often is the 2012 case of Duncan v. New Hampshire, which concerned public funds for state education going to private religious schools, which is a violation of the state constitution. If this amendment had been in place, that suit would have gone forward.

That’s the upside. The downside is that New Hampshire is filled with libertea-loving miscreants who think paying any taxes is illegal. This amendment would give the malcontent crowd an opportunity to sue cities, towns, and the states. The sponsors of the bill claim this isn’t so, that there are adequate protections against nuisance suits. Former NH Supreme Court Justice Chuck Douglas is a supporter of the amendment. In a recent radio interview, he was unable to guarantee that there wouldn’t be a barrage of lawsuits about taxation.

No one has proven to my satisfaction that this won’t be a disaster. Those lawsuits come at a high cost, which is seldom reported on. The money to respond to those lawsuits comes from our tax dollars, which means that something important isn’t getting funded, while Joe Free Stater’s lawsuit about how taxation is theft at gunpoint will get the money instead.

Be sure to read the text of the amendment. At the NH General Court website, there’s a box on the left side of the page where you can look up a 2018 bill. Type CACR 15 (or 16) into the box. When the bill comes up, click on “Bill Docket” and you’ll be able to follow the history of the bill from the beginning. At the top of the page you can click on “Bill Text” and read it.

CACR 16 concerns privacy.  The text of what would be added to the constitution reads, “An individual's right to live free from governmental intrusion in private or personal information is natural, essential, and inherent.”

I have problems with the language. What does this even mean? It sounds good, but how does this translate into legal interpretation? Don’t we have enough trouble with interpreting the word “domicile” in this state? How about the vague language of Second Amendment to the US Constitution?

It’s a laudable goal, trying to shore up an individual’s right to privacy from the government. I applaud the intent; it’s the language that is problematic. This is a good idea that needs a lot more work. At this point, there is no way to know how this will be interpreted in the context of other amendments to both our state and federal constitutions. It’s also worth noting that this barely passed in the House and Senate. It was one vote that secured the three-fifths needed in each chamber.

This bill also guarantees a surfeit of nuisance lawsuits. There will be those that think the DMV has no right to know if they wear corrective lenses. Again, responding to those suits costs money, and we’re already spending a boatload of tax dollars on lawsuits already in progress. Also, to be clear, this proposed amendment does not address the right to privacy from companies, who can buy, sell, and publish our personal information without fear of reprisal.

Both amendments are well intentioned. I don’t believe either is ready for prime time. The online news publication, Manchester Ink Link has two pieces on the amendments, one written by State Representative Timothy Smith of Manchester, and one by reporter Laura Aronson of Ink Link. Smith’s piece is in the opinion section, and Aronson’s is in the news section at manchesterinklink.com.

There is still plenty of time to read up on these amendments and research the candidates you’ll see on your ballot on November 6. Amending the NH Constitution is serious business, and it is our civic duty to be well informed when we vote.

The Attitude with Arnie Arnesen, October 5  - the interview with Chuck Douglas starts at about 29 minutes in.

Published as an op-ed in the October 20, 2018 edition of the Conway Daily Sun newspaper

When the Wall Street Journal reported that the cost of insuring municipal police departments for officer's misconduct had risen 400% in one year, I commented: "When We Furnish the Means by which We Suffer...". I may not, as Justice Douglas noted, have been 'harmed' by an officer's misconduct, but I ended up, as a taxpayer, having to pay [my share] of the impact on local property taxes-even though I was a 'Tenant' and not a 'Property Owner', although my motor vehicle registration costs might have been lower if I wasn't sharing the 400% increase in cost of insurance for my municipal 'government expenses'. The proposed NH Constitutional amendment[s] on this year's ballot may merit 'added reflection'

I asked Bill Duncan about the first of these amendments and as usual, he had some wonderful observations to make. He is the reason for this change given his suit of Duncan V. New Hampshire which was thrown out, and said the following when I asked him about the possibility of frivolous law suits. There were few if any before the change two years ago, therefore there are likely to be few if we go back to the way it used to be. That is just a threat that has to be tolerated in a democracy. The point of the amendment, even though there are criticisms of the wording and etc. is to make sure that the courts pay attention to the concerns of citizens. Whether a person has standing or not is in some ways irrelevant to the importance of the issue and only bears on the frivolous aspect. There are numerous groups in New Hampshire like the Mad Men and the Sovereign Citizens and Free Staters that I worry would jamb up the courts. Bill points out that there are costs to law suits ($280 filing fees and paying court costs) which have historically controlled that problem. We'll see.