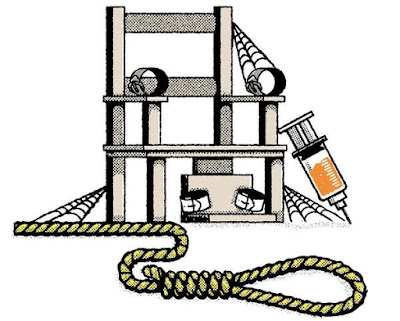 The last time the State of New Hampshire executed anyone was in 1939. For the last 20 years, there has been a bill every biennium to repeal the death penalty. In 2000, a repeal bill passed both houses and was vetoed by Governor Jeanne Shaheen.

In 2019, there is an impressive bipartisan coalition supporting HB 455, a bill that would change the death penalty in NH to life without parole. It seems likely that the bill will pass in both the House and Senate. Governor Sununu has said that he will veto it. There could well be, for the first time in 20 years, enough support for repeal to override the governor’s veto.

I’ve written about the death penalty several times over the years. We know it is expensive – more expensive than life in prison. We know it is not a deterrent. We know that people of color are more likely to be sent to death row. We know that a great many people have been wrongly convicted, spent years on death row, and then exonerated. We also know that at least one innocent person has been wrongly murdered by the state, in the name of “justice.” Above all, we know…well, not all of we, but most of we know that the death penalty is not about justice. It is about vengeance.

As the old saying goes, we kill people to show them that killing is wrong. The state should not be in the business of killing its citizens.

A big public hearing resulted in hours of testimony this week. There was testimony from murder victim’s family members. There was testimony from people who were wrongly convicted and sent to death row.  There was also testimony from former US Senator Kelly Ayotte, who breezed in to emphasize how important it is that we kill Michael Addison, the only person on death row in NH. Ayotte the NH Attorney General vigorously pursued the death penalty case against Addison, and used it as a springboard to a single term in the Senate.

Michael Addison was charged with killing Manchester Police Officer Michael Briggs in 2006. In 2006, a millionaire named John Brooks was convicted of capital murder for his role in hiring people to kill his former handyman, whom he believed had stolen from him. In New Hampshire, contract killing is a capital offense.  John Brooks was given two life sentences without parole. In 1997, Gordon E. Perry killed police officer Jeremy Charron in Epsom, NH. After pleading guilty to capital murder, he was sentenced to life in prison without parole.

When repeal advocates talk about how the death penalty isn’t equally applied, this is exactly what they mean. Gordon E. Perry is white. John Brooks is rich and white. Michael Addison is black. John Brooks was convicted the same year as Addison, in the same state. Kelly Ayotte did not zealously pursue his case. Gordon Perry and Michael Addison both killed police officers. Only one is on death row.

Our Governor has said that he will veto a repeal because he “stands with law enforcement.” Our governor stands with law enforcement when it’s convenient. Sununu’s first legislative priority after being elected to his first term was to eliminate concealed carry licenses for firearms. Law enforcement vigorously opposed that bill. Sununu didn’t listen to them, never mind stand with them. Governor Sununu is a Trump acolyte, and we know that Trump loves the death penalty. Even after the five young black men known as the Central Park Five were exonerated after falsely being convicted of the rape, assault, and attempted murder of jogger Trisha Mieli, Donald Trump continued to call for their executions.

Civilized countries don’t engage in execution. The United States is increasingly uncivilized, particularly in the area of race and religion. We don’t hear any discussion of how, exactly, the state will kill Michael Addison. The methods sanctioned by our state are hanging and lethal injection. Lethal injection drugs are no longer available. The countries that manufacture them don’t sell them to us any more, because they don’t believe in the death penalty. Will New Hampshire purchase other, questionable drugs? Or will New Hampshire rebuild the gallows that was dismantled at the state prison in 1994?

We should, perhaps, take a moment to consider this.  New Hampshire hasn’t conducted an execution since 1939. Will we bring the death penalty out of mothballs to kill a black man? Would we hang him? Tiny, white, New Hampshire proudly clings to the first in the nation presidential primary, despite rumblings from other states that we’re tiny, white, and clueless about the rest of the country. If the moral arguments against the death penalty don’t sway folks, perhaps the very real potential of losing that exalted primary status will.

Published as an op-ed in the February 22, 2019 issue of the Conway Daily Sun newspaper

Thank you for your commentary, Susan.