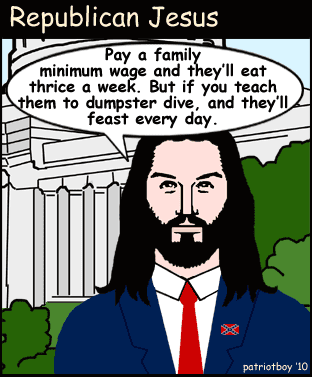 Masks are slipping everywhere. In our towns, all over our state, and across our country, the ruling party is unable to maintain their thin veneer of civility, and their true nature and intent are beginning to burst forth. As is always the case, an exploding pimple is never pretty.

Last week, state Representative Martin Harty of Barrington got into a spot of trouble. The 91 year old freshman state representative told a constituent who called him about funding for the homeless that public funding shouldn’t be spent on: “the mentally ill, the retarded, people with physical disabilities and drug addictions — the defective people society would be better off without." He said that such people should be sent to Siberia where they would freeze and die. After this story went public, Rep. Harty refused to apologize. He said he was only kidding, which is what all Republicans say when they’re caught saying truly offensive things. He also refused to resign. This week he was pushed on to his sword, and resigned from the house, after the story went viral.

Rep. Harty was described by fellow legislators as hard of hearing, seeming confused, and likely to go off on unrelated tangents. About a month after beginning his term he wrote a letter to Foster’s Daily Democrat saying that he didn’t really know what he was doing, he looked at t he other people around him to see how to vote. How is it that a confused, nearly deaf, 91 year old man was elected to the legislature? Several experienced and capable legislators were thrown out of office in favor of Representative Eugenics, so the answer is clear. They voted for the “R” next to his name. That the NH GOP allowed this candidacy to go forward shows that they were willing to do whatever it took to win control of the legislature. Prior to this event, the NH legislature was merely the laughingstock of the state and the nation. This story took the clown college known as the NH legislature global. Nice work, NH GOP!

It seems that Rep. Harty isn’t alone. Earlier this week in Kansas, at a meeting of the House Appropriations Committee, state lawmakers were discussing using snipers in helicopters to help control the state’s feral hog population. State Rep. Virgil Peck suggested they could use the same technique to rid the state of illegal immigrants. Peck was endorsed by “Kansans for Life” when he ran for office. As Harty and Peck illustrate so well - when the mask slips, we learn that only some lives matter. Of course both men claimed to be joking – and what could be funnier than the idea of shooting families from planes or freezing people with Down Syndrome to death?

Local Good Humor man Ray Shakir set off a firestorm at a budget committee hearing by announcing that some kids aren’t worth educating. Anyone who has read any of Shakir’s obnoxious letters to the editor already knows that there are indeed some people who aren’t teachable. He proves it every time he opens his mouth, or sits down at a keyboard. My personal favorite of his letters was the one where he expressed his sorrow that I wasn’t killed when my car hit a moose. Shakir displays the typical attitude of so many who make their money elsewhere, then move to the NH tax free haven for the wealthy: “I’ve Got Mine. Screw You.” He’s a pro-lifer who exemplifies the real Teabaglican motto: Love the Fetus/Hate the Child.

That motto is was visible in the NH legislature this past week. The House Finance Committee is recommending draconian cuts to the state’s health care system. The funds for hospitals, mental health centers, and community health centers would mean some of them might not be able to stay open. In Coos County, community health centers are the source of health care for many people. More people will go to the emergency room for treatment they can’t afford. Without mental health treatment, more people will be “treated” by the corrections system. It’s interesting to note that Jim Roche, president of the Business and Industry Association questions the wisdom of these cuts. He points out that the costs will be shifted to those businesses that are struggling to keep offering insurance to their employees. In a state with at least 10% real unemployment, it’s hard to see this as an enticement to businesses considering locating here. For those worried about the cost shifting to the towns, Rep. Neal Kurk (a man who rubs his hands together with glee at the mention of the word “suffering”) has filed a bill to repeal the state’s 200-year-old law that allows needy people to turn to their towns for financial assistance. He realizes that cutting people off from aid doesn’t mean their needs disappear. He wants to make sure the safety net is completely removed.

At the same time, the House voted to increase the death penalty. As soon as the bill was introduced, the Speaker called for a vote. One might view this as questionable conduct on the part of the Speaker – given that he was the bill’s primary sponsor. The fiscal impact of the bill is dramatic – it potentially adds upwards of five million dollars a year to the budget. This seems a curious choice in a time of draconian budget cuts. These avowed pro-lifers would rather spend millions to kill one person than spend a dime to save the lives of many.


“Fortune does not change men; it unmasks them.” Susanne Curchod Necker
Posted by susanthe at 1:09 PM

Fortune has indeed unmasked men, in this case thousands of them. Starting with Boo-hooner and working its way down the brownshirted jackboots. The Nazi's started out the same way. All the dispossessed, the retarded and disabled, those "outcasts" of society, were incarcerated, experimented upon and murdered. More recently, apartheid South Africa used the EXACT rhetoric I'm reading from the right to justify their treatment of Africans. "They don't deserve any better, they are dumb, they just aren't as smart as us whities". There is absolutely NO difference anymore between The GOP, their supporters and the Broederbonders who were vehement Nazi supporters. Land of the free and home of the brave? Really?

I found your article, Unmasked, so on target as to what is happening in Concord. I am a retired teacher watching the New Hampshire Retirement System being ripped apart with these know-it-alls. Rep. Kurk, in his Napoleonic stature, is a most pompous buffoon, unfortunately with a following of newly elected, uninformed, partisan Reps.
Kurk is in partnership with Rep. Hawkins from Bedford who has been appointed by the Speaker as the House Rep. on the NHRS Board of Trustees. Both have had a vendetta against the retirement system for years. Hawkins can't sit still for more than 40 min. without having to rush outside to smoke his cigarettes. Isn't a coincidence that the cigarette tax is being reduced by 10 cents? He too rubs his hands together in glee. These men are such hypocrites; they will not support women's health rights, but yet will cut any funding to help single women who are trying to raise children by themselves. (I am not one, but do care about them.) They only pick on the most vulnerable. Grrrrrr! The next election can't come soon enough. Thank you for your sane article in a world of the insane media blitz.

Unmasked was excellent. I sometimes think our Republican legislature was created by Joseph Heller (Catch-22.) We in the north country are blessed with a number of Democrat reps, but that is negated by Senator John Gallus (R) Gallus looks and acts like the character who is the symbol of the Monopoly board game.