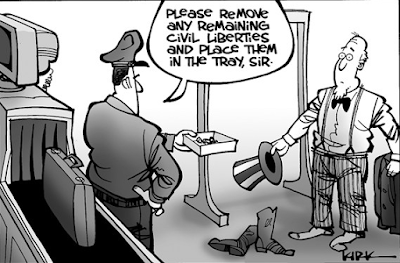 On September 11, 2001, contrary to popular belief, the terrorists really did win. Since that day, the US has been obsessed with internal security, as if harassing US citizens would protect the nation from another terrorist attack.

We learned nothing from 9/11. No national humility crept in; we were too busy waving flags, beating our chests, and bellowing USA! USA! USA!

Since then, however, we’ve cracked down upon the enemy, and apparently the enemy is us. The Patriot Act was pushed through even though hardly anyone had read it. It gave law enforcement the authority to search homes and businesses without the owner’s consent or knowledge. It gave the FBI the authority to search telephone, email, and financial records, without a court order.

A few years later, the REAL ID Act was passed. To get it passed, it was attached to a military spending bill. In 2005, few would dare vote against a military spending bill. REAL ID was sold as a way to “set standards” for the issuance of identification – such as driver’s licenses. It made sense for a nation fearful of another foreign terrorist attack to create standards for driver’s licenses as a means of prevention. It wasn’t quite as brilliant as having air passengers remove their shoes, but close.

Privacy advocates were howling in outrage at the thought of a “national ID card.” It proved so unpopular that the date for compliance was put off several times. In 2007, it was announced that compliance by states would be put off till 2009. In 2008 the deadline was extended to 2011. NH was one of the states that fought hard against REAL ID. That opposition was in character with the “live free or die” philosophy we’re supposed to be famous for embracing. It was in character with our reputation as a libertarian leaning state.

Somewhere along the way we stopped fighting REAL ID and meekly submitted. Sixteen years of indoctrination – a combination of fear based agitprop and training to submit to authority, changed our tune from Just Say No to We Have to do this for National Security. REAL ID means that the state maintains a database of information on people, including Social Security numbers and photos. This database can be accessed by federal authorities, and will be all fun and games until the identity theft begins, and it will.

Let’s do a quick summary: The US experienced a big terrorist attack. We became afraid. Rather than evaluate US behavior in the world, we chose to suspect ourselves. We were programmed to submit to measures that invaded our privacy in the name of safety and security. We were trained (by means of constant drumbeat) to fear terrorists, especially at the airport. Apparently terrorists were just waiting to pounce on suitcases full of dirty underwear, and use them for nefarious purposes. FYI, you’re far more likely to be killed by a white, male, domestic terrorist. We ignore that reality – it’s not a money maker, and it doesn’t appeal to authoritarians.

Last week I was driving north on I-93, when I passed a pop up Border Patrol Inspection near Lincoln.  Cars heading south were being stopped and quizzed about their citizenship by Border Patrol agents, who may also have had drug-sniffing dogs. Not much shocks me anymore – but that did. After all, the border crossing is in Pittsburg, which is 2 hours away. It turns out that the Border Patrol can operate immigration checkpoints within 100 miles of an international or coastal border, which is pretty much anywhere in New England.

New Hampshire’s second largest industry is tourism. Nothing says welcome to NH like, “show us your papers.” NH is loath to pay for highway rest stops (or maintain the few still in existence) so instead - we’re going to give them an adventure! The possibility of being detained by US Customs and Border Protection will enliven a dull highway journey, especially for those of a duskier hue, which is what this is really all about.

This pop-up checkpoint had been an annual event in NH. Vermont’s Congressional delegation fought hard against them, and so they’d mostly stopped in Vermont. On I-95 in Maine they appear, generally in the Houlton area.  About five years ago, the NH checkpoint had stopped. According to an NHPR story, US Customs and Border Protection has been newly empowered by the Trump administration to resume this checkpoint and more of them can be expected.

There hasn’t been a peep out of the liberty and freedumb crowd about this. Not a word from the allegedly liberty loving Free Staters. The folks who do the wailin’ about gummint encroachment on our lives are strangely silent when it comes to “show us your papers” stops. Their interest in gummint interference extends to deregulation and tax cuts. Actual violations of privacy and civil liberties don’t interest them in the slightest.

Live Free or Die has become Roll Over and Submit. 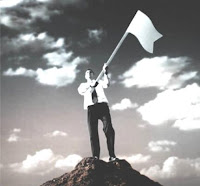 Published as an op-ed in the September 1, 2017 edition of the Conway Daily Sun newspaper

Susan your post is mostly excellent. Thanks for taking the time to write it. A few minor corrections:

Keeping an open mind and eyes wide open is necessary in every walk of life. Great article Susan....Keep up your quality awareness and writing publicly about it....This article should be in the NY Times, Wall Street Journal and USA Today..

I'm glad you wrote this because the checkpoints are something I am also deeply concerned about. That said, why not frame your arguments without attacking libertarians or free staters? Guess you just want us to go protest and push back and do your dirty work for you, and then you'll write about it from the safety of home while continuing to call us names.

District One State Senator Jeff Woodburn was at the forefront of giving CBP law enforcement officers state authority which they now have. My impression they were invited in to support existing, and often limited law enforcement resources that exist in the North Country.
Border patrol activities 100 miles south of the border is a concern, but your treaste neglects to even mention the 25 plus illegal aliens that were stopped in Lincoln. And to your comment about Vermont, if you actually did some research here you'd find that CBP is the only law enforcement in this area of Vermont, including interdiction of inflows from cross border areas like Montreal and Sherbrooke.

FSP is a corporate front group. They don't give a shit about real individual rights. And that tool Max Abramson and Murphy are full potato alt right Trumpers. Anyone shocked?

Yeah you rail on Libertarians for not doing anything for these checkpoints - but what have YOU DONE?

These people work tirelessly against an institution that extracts all the equity they need to operate at any level from the people. They get arrested, they protest, AND APPARENTLY they deal with the SCORN of NH citizens that have no sense of duty or freedom.

And now that you've finally figured out that they were right - you bash them for not doing enough?

Why don't you go out there and travel back and forth the checkpoint and refuse to cooperate and get arrested yourself.

Yes, one can see how deeply concerned you are about checkpoints, Carla - seeing as how there has been no comment from the FSP, no tweets, no nothing.

That, Carla, is why I'm attacking libertarians and Free Staters. It's been a week and none of you have said boo. And now you're embarrassed that I pointed it out, so you're attacking me - without even having the ovaries to use your real name.

For those not in the know - Queen Quill is the nomme de douche for Carla Gericke, former President of the Free State Project.

Jason A. Jensen - having a slow day in Nebraska and you just "happened" upon my blog?

It seems the FSP broflakes have put the word. Jesus, you people.

Steven J. Connolly - I see that you're still suffering from annoyance that I get published and you don't. Too bad that blog you used to write for folded. All that bad writing! All that ideological nonsense! It's a whole new level of awful when right wingers won't support their own.

Oh, by the way -I actually did do research, Spanky, which is how I know that the Vermont Congressional delegation fought hard to make those checkpoints stop. You ought to try it sometime.

Well written. Thank you. I agree, more of us should have spoken up in more public spaces in outrage. I spoke about it at a speech and on a radio show the day I saw it, but I personally could have done more. And as a libertarian I SHOULD have done more publically. You were right in shaming us who did not. I drove by the stop in Woodstock on Sunday while it was happening. I was horrified that we allow this. I also would like to point out that Jeff Sessions is also promoting these types of actions by demanding that those states (like ours) that do not want Asset Forfeiture in their states are all out of luck because the federal laws override the state laws so if the federal officers want a checkpoint and they want to profit sharing from the local and state officers they can do it. Profit sharing increases cooperation with these activities. I know that when I complained about this I got a lot of "Well, they are illegal immigrants." or "They should be doing drugs and they will be fine" but that checkpoint did not just pull over illegal immigrants (who NHPR stated had something wrong with their visas not WHAT was wrong with their visas) and they did not just pull over people with drugs. They pulled over EVERYONE. Every single person was subject to a warrantless search and then seizure of whatever the federal agencies deemed seize-able. We don't know everything they took. We also say that if they had drugs in their car that somehow justified taking away their rights. Both the US Constitution and the NH Constitution specifically state that we are protected from search and seizure....clearly those in power don't care about those silly documents though...

FSP useful idiots are as annoying as Scientologiest in their flying monkey whining. Ask Carla how she feels getting fired by the Corporation and replaced with all white men. Ouch.

Why aren't the progressives out protesting and standing up for the civil rights? I guess they don't care either. Also, you must not be following the free staters as much as usual because many of them, including myself, have condemned the border checkpoint. We need a border checkpoint to keep out the bad MA people, not the immigrants :)

It sure is entertaining to see how miffed all you Free Staters are, Dan. All that talk about Freedumb and Libertea - and here ya'll missed the boat on this checkpoint. I wonder why?

Tell me, where were these condemnations of the border checkpoint? In the newspaper? On TV? Has the CEO of the new corporate Free State Project issued a statement?

Are you going to offer pro-bono legal services to the folks detained at the checkpoint, Dan?

Keep the bad MA people out? Lol. I am sure most in MA are sick and tired of clogged interstate highways because NH can't find enough economic opportunity to employ their own residents.

Watch out for Kris Kobach's so-called voter fraud commission. They are looking at New Hampshire as an example of "voter frauds." They will at least attempt to introduce a federal voter card, which would look and smell awfully like a national citizen ID card like something you see in Europe and Latin America. Like everything else, mission creep is inevitable and before you know it you'd have to have one in order to travel, get a job, open a bank account, or yes, to not be arrested at some random checkpoints.